LNG marine terminal for set up in Portland Bight area 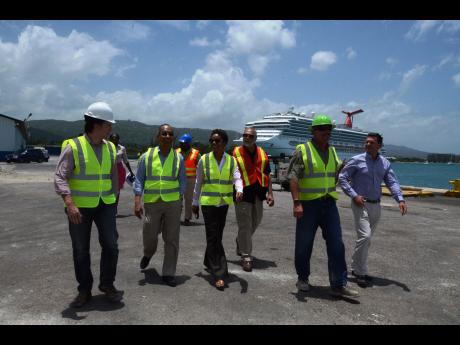 In this August 2016 photo, New Fortress Energy (NFE) hosts a tour of its Montego Bay terminal. Walking the port are (from left) Brendan McElmurray of NFE, Minister without Portfolio in the Ministry of Economic Growth and Job Creation Dr Horace Chang, Attorney General and Member of Parliament for West Central St James, Marlene Malahoo Forte, Ed Marsh of the Port Authority of Jamaica, Johnathan Klion of NFE, and chairman of the Montego Bay Free Zone, Mark Hart.

The plan to build and operate a liquefied natural gas marine terminal and pipeline by American company New Fortress Energy (NFE) will place the facility five kilometres offshore within the Portland Bight area or close to the Goat Islands, according to the environmental impact assessment (EIA) released this month.

New Fortress will execute the marine terminal and pipeline project through affiliate NFE South Holdings Limited. A public consultation on the project is set for September 28 in Old Harbour.

The environmental report done by CL Environmental Consultants Limited on behalf of New Fortress also estimates that the project will provide nearly US$1 billion worth of value over its lifetime and create about 300 direct jobs in the process. Indirect jobs are estimated at 200 to 600.

"Based on this analysis, the final net present value of the project, after application of social cost benefit analysis, turns out to be US$953.4 million. Hence, the project should be undertaken as it has multiple social benefits which are reflected in the final positive NPV of the project," the report stated.

The project forms part of the wider plan to bring LNG to the national grid. The marine terminal will feed gas to the new 190MW plant that Jamaica Public Service Company is developing at Old Harbour. New Fortress is also supplying gas to JPS' Bogue plant from a terminal developed in Montego Bay.

The marine terminal EIA report reasoned that consumers, but in particular the manufacturing sector, would benefit from the lower cost of electricity and the establishment of a more reliable power supply.

"This will lead to more possibility of manufacturing that will lead to creation of employment opportunities for unskilled and skilled workers. This is hard to quantify and hence the number are not adjusted for it. Which means that the social benefit stayed below is a lower bound," the report stated.

The NFE project involves constructing a marine terminal comprising of a vessel berth and offshore offloading and regasification platform.

"The location will be up for approval by the Port Authority of Jamaica in the Portland Bight area of Jamaica," said the environmental report.

It adds that the facility will accommodate a floating storage unit or FSU vessel for LNG storage and a LNG carrier delivering gas to the FSU. The platform would contain equipment to regasify LNG as well as related process and safety equipment.

"The liquid gas from the FSU would be carefully regasified and the gas would then be released into an undersea pipeline which will be mostly directionally drilled in basically a straight line from the platform to the vicinity of the JPS plant," stated the EIA, which adds that the pipeline, at some five kilometres in length, would connect to the JPS gas power plant on shore.

"In addition, the project will construct a new, or refurbish an existing, automotive diesel oil line from storage tanks to the renovated power plant in order to enhance the reliability of the facility in case of LNG delivery interruptions."

The marine terminal will be constructed offshore in the western side of Portland Bight, at a distance about 200 metres from the shipping channel to Port Esquivel in approximately 14 metre of water depth. "This location offers sufficient depth to berth the FSU and the LNG carrier vessels without the need for dredging, yet has sufficient protection from storm wave impacts as a result of the shape of the Bight," stated the report.

NFE is expected to supply JPS as well as potential future industrial users with natural gas. The main objective is to provide the Jamaica Public Service Company's Old Harbour Plant with a cleaner and more cost-effective fuel in furtherance of the goals of the National Energy Policy.

NFE will conduct the project through its NFE South Holding and with the sponsorship of Fortress Investment Group, a global asset management firm with approximately US$70.64 billion of assets under management and an experienced investor in transportation, infrastructure and energy assets around the world, the environmental report said.

The annual fuel savings from the project is projected at US$74.2 million which represents a 38 per cent reduction in cost. The report adds that, assuming a 75 per cent pass-through to the consumer and a 25 per cent mixed of the generating capacity of the JPS, it will result in a seven per cent reduction is consumer prices. This figure matches the fuel savings published in a separate EIA report on the JPS Old Harbour plant upgrade released in April, as the projects are complementary.

JPS, which has a licence from the Jamaican Government to operate the national electricity grid, is constructing the 190MW plant adjacent to its existing Old Harbour facility in St Catherine, which has the capacity to generate 220MW of power. The current plant will be dismantled once the new one is commissioned.