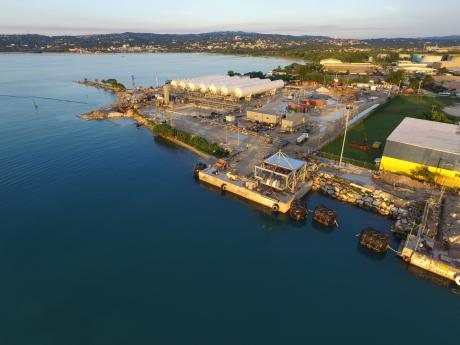 A coastal view of the new LNG terminal in Montego Bay.

The liquefied natural gas supplies destined for the power plant at Bogue in Montego Bay will be offloaded in the Portland Bight area and then ferried to the north coast, according to the Port Authority of Jamaica.

The port agency has leased seven acres of land in Montego Bay to the Jamaica Public Service Company for the establishment of a terminal and pipeline for the delivery of LNG to the Bogue plant, activities for which JPS' gas supply partner, New Fortress Energy, is responsible.

PAJ Vice-President for Business Development Edmond Marsh explained that LNG for the Bogue plant would be shipped from the United States via charter vessel Golar Arctic, which arrived in Jamaica in August, was taken to Kingston for registration and is now anchored in the Portland Bight area.

In turn, a feeder vessel, Coral Anthelia, will transport LNG from the Golar Arctic to Montego Bay on a weekly basis, he said.

The Coral Anthelia was scheduled to arrive in Montego Bay on September 30 to conduct a dry run, without any cargo. She was scheduled to return on October 3 fully loaded to discharge into the LNG tanks onsite for commissioning of the LNG plant thereafter.

However, Friday's ship call was postponed because of the impending hurricane.

Marsh also disclosed that the Port Authority would also be embarking on a project to establish a facility in Montego Bay to capture wasted energy released during the LNG regasification process.

He noted that New Fortress was planning to use seawater to heat up the liquefied product to gas and release the water back into the sea.

"We are looking to harness that waste energy to use in cold storage," the port executive said.

Meanwhile, Marsh said the US$40 million berth to be constructed at the Montego Bay port has been accelerated by the LNG programme. He said the Port Authority would construct and equip a new dedicated cargo facility and turn over the existing cargo berth to the cruise ships.

"LNG has accelerated that development and we are in discussions with the other users, such as Petrojam, to make sure that the berth that we are building will cater to their needs," said the VP.

He suggested that the presence of LNG in Jamaica would bring other potential benefits, noting, for example, synergies with the cruise industry.

"A number of the cruise vessels have signalled that they are in the process of converting to LNG as their fuel source and some of them actually come to Montego Bay," he said.

"So we have been in discussions - not just we - New Fortress has discussed with those cruise liners the ability to get bunkering, get fuel, in Montego Bay when that becomes readily available."