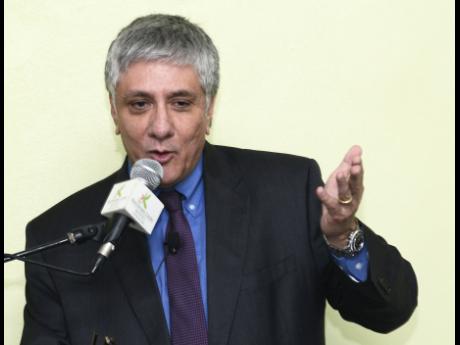 US Ambassador to Jamaica Luis Moreno is linking the phenomenon of de-risking facing Jamaican banks to the explosion of lotto scams.

Speaking at the Anti-Money Laundering/-Counter-Financing of Terrorism (AML/CFT) conference Tuesday Ambassador Moreno noted that the Jamaican Government and other interests have been making strong representation to United States authorities about the loss of correspondent banking arrangements.

He then noted to conference participants that while big banks overseas were ending those partnerships, an estimated US$500 million to US$1 billion was scammed from vulnerable Americans.

Lotto scamming has been a long-standing and growing problem for the Jamaican authorities who recently announced the reinstitution of a special task force to rein it in.

Some fraudsters have been known to utilise-money transfer businesses to collect their illicit proceeds, a phenomenon that at one time prompted American remittance company Western Union and its Jamaican partner, the GraceKennedy Group to take extraordinary measures to weed them out. Other remittance businesses also tightened up on transactions for the same reason.

The ambassador later told Gleaner Business on the margins of the conference that the US views lotto scamming as a clear and present danger to the economies of both the United States and Jamaica. He says to that extent both countries must work together to solve the problem.

"We well know that these people use the banking institutions to transport money; that they use whatever loopholes they, can and we have to do everything to de-risk that as much as possible and close those loopholes," said Moreno.

The ambassador outlined the initiatives taken to shore up AML/CFT efforts in Jamaica. He said the US is assisting with training of agencies such as the Financial Investigation Division, the police through MOCA, which investigates organised crime, along with regulatory agencies.

"You know as well as I do that lotto scamming has caused an explosion of violence in Western Jamaica. This has victimised thousands of persons in the United States, the most vulnerable of our population, so it is something that we have to work on," Moreno said.

He noted that elsewhere that tough banking regulations and due diligence on customers have proven very effective in countering the corrupt activities of drug lords and international criminal organisations such as the Cali and Medellin drug cartels, saying at one time Cali "was among the most sophisticated criminal organisations in the world". Its members went to great lengths to amass their wealth and protect it.

"These guys had accountants with their MBAs from Harvard University. They had accounting procedures that were coded so that the National Security Agency, the most sophisticated machinery, could not crack," Moreno said.

The ambassador said that the US government was able to break the criminal organisation by tracking them through the banking system and other formal transactions.