FundSME targets 500 for funding fair, finalising its own registration 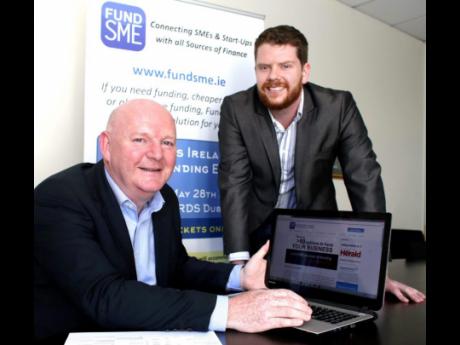 Irish outfit FundSME is targeting 500 enterprises for a funding fair through which they can pitch ventures to a line-up of prospective backers.

It's all to happen in one day in November, according to the matchmaker, which operates a web platform whose business model rests on the same objective - finding right-fit backers for small businesses or start-ups in search of capital.

Director of FundSME Nollaig Fahy says the Jamaican FundSME platform has so far proved to be an effective tool to bring people together, using preset criteria.

"As soon as they click submit, their answers to the 15 questions are matched with the criteria that we get from the funder. It's an 80 per cent match. The funder still has to do due diligence on the SME, but we've created what we call a qualified lead and that lead gives the SME the best chance of being funded," Fahy said in an interview with the Financial Gleaner.

"The whole concept is to get people informed, get them inspired, and eventually get them funded. That will equate to real jobs," he said.

To date, 3,200 small and medium enterprises (SMEs) have registered with the platform. Fahy says this has exceeded all expectations, especially since FundSME has managed to identify 106 funders in Jamaica that, he said, are serious about financing viable SME projects.

Patrick Keaney, another FundSME director, said they have identified 200 companies that want up to US$12 million in funding - prospective ventures that, Fahy added, are projected to create up to 500 jobs were they to get off the ground.

As for the upcoming fair set for November 3 at The Jamaica Pegasus hotel, Fahy said up to 20 funders will be there. Prior to the fair, the 500 or so SMEs targeted will be pre-matched with financiers and rostered to make their pitches at the event.

So far, the list of funders includes well-known names in the small business and venture financing arena. In addition to state actors such as Development Bank of Jamaica and EXIM Bank Jamaica, outfits such as JMMB, First Angels, I Fund Jamaica, among others, are on board.

FundSME says that each funder will hear pitches from 20-30 SMEs, on average. This will be interspersed by presentations from 15 speakers - five funders to tell the SMEs how to get funded; five case studies; and five inspirational speakers.

Keaney was clear that the meetings between funders and SMEs will not be just a simple chat. He says funders have been vetted and SMEs can expect to meet with serious people.

"We won't have anybody that can't help people, obviously, except the sponsors. There will be no funders there that can't give somebody money," Keaney emphasised.

Pressed as to how FundSME Jamaica will make its money, Fahy said there is a charge for funders to list on the FundSME platform, and a deeper commitment when the funder gets together with the SME.

"It's a one-off payment that happens for the first 12 months when there is a loan or a piece of financing. Whatever that number is - if there is say $100,000, we get up to two per cent of that as a one-off, and then if the funder does more business with that new client then that's their business, not ours," Fahy said.

He added that FundSME operates on low margins.

Presented with the possibility that participants may not want to play by the rules by ducking FundSME's fee, Keaney harked back to their experience over time.

"Yeah, they could try that, but we'll know, and what you'll find is that they won't get another deal. We know this works. You'll find one or two being difficult, but in the end they want business, and if we find that they don't pay and they're messing around, then we'll give it to someone else who fits the criteria," Keaney said.

FundSME operates strictly as a matchmaker and does not get involved with administering loans once a backer puts up capital for an SME, Keaney affirmed, saying their part ends once the parties have been matched and that they step away once a financing deal is done.

FundSME is not yet registered to do business in Jamaica. Keaney said this is one reason the Irish company has so far not charged the funders that have listed on the FundSME platform.

However, he said the paperwork to register in Jamaica should be finalised by today, Friday.

"We are working with our partners at Paramount Business Services. They are helping us with the formalities. In another day or two, we expect that all will be in place and the company will be called FundSME (Jamaica) Limited," Keaney said on Wednesday.

Thereafter, FundSME will do a full roll-out of its programmes, he said.

GB Energy and Digicel are listed as sponsors of the November 3 'Meet the Funders' event.

Keaney said that up to Wednesday, his company had already made 120 matches and were processing another 200 applications in preparation for the funding fair.