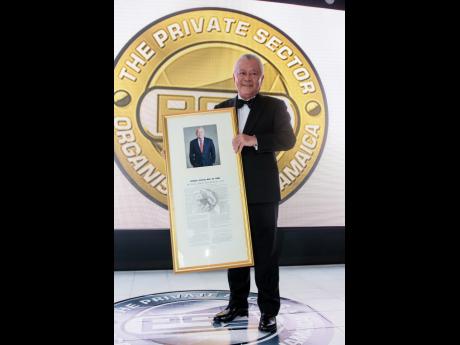 Darien Robertson
Gary 'Butch' Hendrickson poses with his citiation at the ceremony for his induction into the PSOJ Hall of Fame, held at The Jamaica Pegasus hotel on Wednesday night.

Gary 'Butch' Hendrickson, new inductee to the Private Sector Organisation of Jamaica's (PSOJ) Hall of Fame, is charging that members of the private sector are reneging on their duty to take part in nation building.

Hendrickson, an outspoken and energetic businessman who is respected by his peers and employees alike, wants his compatriots in business to be more daring in their contributions to make Jamaica a better place for all.

"If there ever was a time when the moment should be seized for such a partnership it is now when economic conditions are more favourable, commodity markets are more stable, oil prices are relatively low," said Hendrickson, head of Continental Baking Company, which operates National Bakery.

Through his company, he now backs up-and-coming businesses under an initiative dubbed 'The Bold Ones'.

In the citation by the PSOJ, Hendrickson - a Jamaica College alum who also attended the Miami Military Academy and then Fordham University - was lauded for his leadership and the way he cares for his staff. He is also highly regarded for his philanthropy, donating hundreds of millions of dollars to several causes over the years, particularly in education through the National Baking Company Foundation.

Landmark projects include Crayons Count, The Little Leaders Programme, and 'Training Wheels', all aimed at boosting the potential of young children.

Hendrickson on Wednesday joined his father, Karl Hendrickson, in the PSOJ Hall of Fame, making them the first father-son duo in the club of business luminaries.

Hendrickson, the younger, issued his call for service under the banner of "the fierce urgency of now", emphasising that it summons stakeholders to take immediate and decisive action. He said persons should look beyond their narrow interests and put country first.

"Let there be no personal agenda, but rather 'Jamaica First and Done'," Hendrickson emphasised.

He lamented the persistent lack of real growth in the Jamaican economy, noting that for far too long, Jamaica has been in alert mode, with no real progress and no definite path.

"We've been poised and ready at the starting blocks, with growth and achievement and success visibly within our reach. What should be a smooth, determined sprint invariably turns into a mountain marathon with obstacles and setbacks and deterrents strewn across our tracks. The result is confusion despair, disorientation, and a loss of focus," he said.

Hendrickson said it is not good enough to stand aside and do nothing. He chided private-sector stakeholders for being part of an ethos of under-achievement and charged them to act more boldly.

"The time to be out with the old and in with bold is here. It is no longer an option to sit passively on the sidelines on our verandas of hopelessness and despair bemoaning our failures and inadequacies and pointing out, quite uselessly, what others could and should have done. This is our time. This is our challenge. This is our shared responsibility, for we have to stand up and be counted," Hendrickson charged.

He said that Jamaica has been mired in apathy that has affected the psyche of the nation and affected chances for growth, while pushing the society to a point where it is losing its moral compass.

Hendrickson said he was joining fellow Hall of Fame inductee Glen Christian in calling for the redevelopment of the downtown market district. He said this move could unearth the talent and economic value that is inherent in having well-developed infrastructure at the heart of a city.

He also joined PSOJ President Paul Scott in calling for the implementation of three significant changes to Jamaica's business arrangements. Both men have called for amendments to legislation to allow for inventory and receivables to be recognised as security under the Bank of Jamaica regulations and for regulatory reform with a view to unlocking the ability of pension funds to invest in broader categories of investable assets such as US-denominated securities.

There was also a call for a reduction in the minimum capital test requirement for insurance companies, which is currently 250 per cent in Jamaica, to unlock investable funds that could be diversified away from government bonds and invested in productive activities. The ratio is around 150 per cent in developed countries such as Canada.