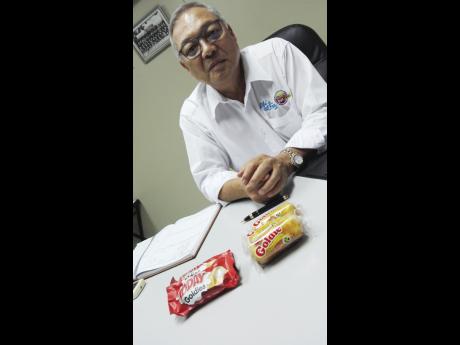 Steven Jackson
Honey Bun chairman Herbert Chong shows the cream filled cake 'Goldie' made by his company in transparent packaging at right and a similar product imported from Turkey in red packaging at left, at Honey Bun's offices on Tuesday, November 1, 2016. 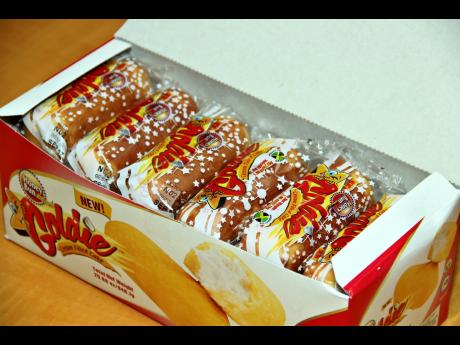 Bakery outfit Honey Bun 1982 Limited revealed a one-year and ongoing circuitous probe this week involving the organised crime unit and other agencies into an imported product similar to its popular pastry Goldie, a cream-filled cake.

Honey Bun is claiming infringement of its intellectual property rights.

The company is dealing with the rival product called Today Goldies, imported from Turkey, at a time when it is pumping capital into its operations and is anxious to safeguard its market share.

Honey Bun is spending nearly $100 million on a 10,000-square-foot warehouse and underground water tank aimed at increasing its storage by 25 per cent. The bakery company will finance the upgrade with a mixture of cash from operations and debt - it had a cash pile of $73 million at its last earnings report for the June quarter.

Some $74 million of the capex will go towards developing the warehouse and $20 million for the water tank.

Honey Bun launched its trademarked Goldie cream-filled cakes in vanilla flavour in 2012 and then chocolate a year later. Shortly thereafter, the company noticed an imported product named Today Goldies, a cream-filled cake, on grocery shelves in the rural parts of Jamaica.

"It is hurting us, morally," said Herbert Chong, executive chairman of Honey Bun, in an interview with the Financial Gleaner on Tuesday. He said, however, that revenues continue to grow at the bakery, while arguing that Jamaica is the real loser.

Honey Bun has been unable to identify the person or business importing and distributing the Turkish pastry.

The company, run by Chong and his wife Michelle Chong, initially sought advice from the Jamaica Intellectual Property Office (JIPO) on how to protect its trademark. JIPO directed Honey Bun to the Counter Terrorism and Organised Crime Investigation Branch (C-TOC).

In the meantime, Honey Bun in an attempt to know its competitor, went to Jamaica Customs seeking information on the importer, and also the Bureau of Standards Jamaica on whether the product meets local guidelines. The standards agency mandates a 10-month shelf life, and that the labelling of products follow particular guidelines on nutrition and other disclosures.

The imported product also appears to be growing in popularity.

"It has gone from being distributed in rural areas to being in supermarkets in the Corporate Area," said Janelle Brown, head of marketing at Honey Bun.

The pastry is produced by a company called Elvan from Turkey. Efforts to reach the company were unsuccessful up to press time.

Honey Bun says based on its enquiries so far, Elvan itself has done nothing wrong. Rather, its argument is that it holds the trademark for the term Goldie.

"So it is infringement, definitely," Chong asserted.

JIPO confirmed to the Financial Gleaner that Goldie is registered to Honey Bun in its Trademark Registry. JIPO added that C-TOC would enforce any infringement.

The Financial Gleaner rang the Constabulary Communication Network (CCN), the communications arm of the police force, for an update on the case and was told that C-TOC would need to confirm whether it was involved in an ongoing investigation.

CCN then reiterated that C-TOC would have to confirm that information.

Chong indicated that C-TOC received information from Customs on the importer. But when C-TOC conducted a raid on the premises, they released the individual as he denied being the head importer.

Based on the lack of progress by the authorities, Chong said Honey Bun's next step involves differentiating the two products and sensitising its customers through social and traditional media outlets.

Meantime, the new warehouse to be built by the company will take up space now used as a parking lot on the bakery's grounds at Retirement Crescent in Kingston.

"We will build out in phases - the first phase will be between 5,000 to 10,000 square feet," said Chong. Construction is scheduled to begin by February and end around the third quarter of Honey Bun's 2017 financial year, that is, around June.

Honey Bun purchased new property contiguous to its head office in 2014 in order to facilitate the expansion of the company to 31,000 square feet.

Honey Bun's balance sheet currently values its fixed assets at $325 million. The company's earnings report for year ending September 2016 is pending, but at the nine-month mark, revenue spiked by 34 per cent to $903 million; net earnings more than doubled in the period to $132 million.