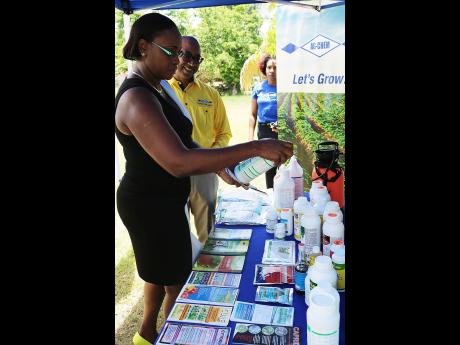 File
Member of Parliament for East Rural St Andrew, Juliet Holness checks out the instructions of one of the many products sold by Ag-Chem, much to the amusement of General Managing Graham Dunkley at the launch earlier this year of AgriHope, a pilot project under which farmers in the constituency will be engaged to plant selected vegetables which are in demand by hotels. 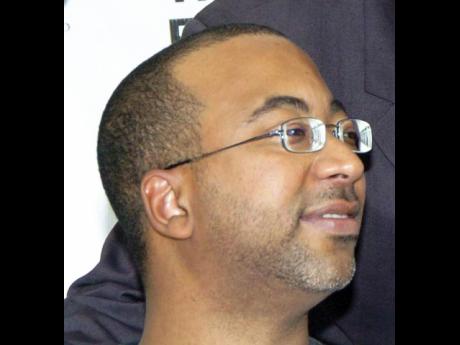 Jamaican chemical company Ag-Chem is making good on its promise to displace Chinese imports of agricultural chemicals and fertilisers in the Trinidadian and Eastern Caribbean markets.

Ag-Chem was acquired by the Joe Pires-led Trinidadian outfit Caribbean Chemicals in January 2015, but full takeover and unveiling did not happen until July 2015.

General Manager Graham Dunkley says even while the takeover process trundled along, his company wasted no time in tapping into the lucrative Trinidad market, "It took a lot of work and considerable time but we have managed to be reasonably competitive to the Chinese imports," Dunkley told the Financial Gleaner, emphasising that Ag-Chem is not done as yet.

"In April, or thereabouts, we did our first exports to Trinidad and we've been consistently exporting products that we manufacture here in Jamaica to that market. We are completing registration now to enter the Guyana market, and we continue to watch what is happening in Suriname and see what possibilities there are," Dunkley said.

The general manager would not comment directly on the value or volume of exports, but said the new deals pushed the company to levels that were above expectations.

"Our exports to new markets helped move our overall exports to 6.1 per cent of sales, approximately 65 times the target," Dunkley said.

He said the company has managed to best the Chinese imports simply because it is closer to the market.

"One of the advantages we have is the time it takes for us to get an order and fill it in the receiving country. It addition, we can boast of consistent quality and reliability," Dunkley said.

He revealed that so far, Ag-Chem has been primarily concerned with the herbicide lines. Dunkley notes that they are now looking at insecticides and towards the third quarter of 2017, they should have a lot more to talk about.

Joe Pires had earlier vowed to break into the Trinidad market, citing the fact that the value of fertiliser imports stood at US$3.5 million.

Meanwhile, in the Jamaican market, the chemical company has had to adjust its strategy and shift the business model. Ag-Chem was formerly the farm chemicals division of the Lascelles deMercado Group, which was acquired by Italian firm Gruppo Campari in 2014. The spirits company wasted little time in making it clear that they would be hiving off all the divisions that were non-core business. Federated Pharmaceuticals and Ag-Chem were among those divested.

Dunkley is therefore pointing to the post-acquisition period as a time for adjustment and coming to grips with new realities.

"We consider 2015-2016 to be an abnormal year because of several factors. Ag-Chem took over operations in mid-July 2015 and immediately faced several challenges such as insufficient inventory, supply chain disruptions, a rapid decline in the Jamaican sugar cane sector, continuing effects of the drought of 2015, and severe fallout in the export market," he said.

Ag-Chem was used to dealing with larger agricultural holdings and big sugar cane farmers. Dunkley said the new dispensation meant a different ball game when it came to getting their products out the door.

"We saw movement away from our larger Ag-Chem product sizes (200 litres and 20 litres) towards smaller sizes (3.8 litres and 1 litre) and this was consistent with our changed route to market, focussing on the small retail stores," he said.

In addition, the 15 agriculture and agro-business qualified representatives were mandated to pound the pavement and trudge the fields to spread the word about their products and effect technology transfer.

"Over the course of the last year, we have directly come into contact with about 7,000 farmers through training events, seminars, field visits, farm visits and the like. In order to transfer technology, you need to interact directly with farmers," Dunkley said.

He is still not giving hard numbers, but says despite the uncertainties of the post-acquisition period, the company "achieved 98 per cent of our sales targets and we closed the year profitably".

"2017 is looking like a year of opportunity because there is room for growth in agriculture; in production and the productivity of the farmers, and that aligns with what we are about, because that gets us up in the mornings. We have every reason to be optimistic," he said.