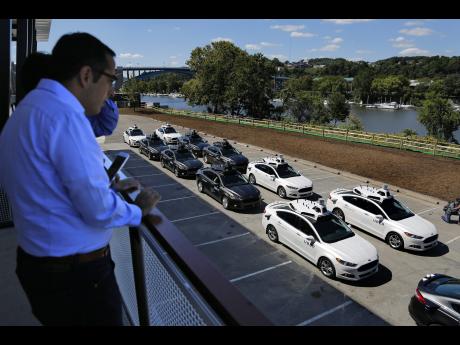 AP
In this September 12, 2016 photo, a group of self-driving Uber vehicles position themselves to take journalists on rides during a media preview at Uber's Advanced Technologies Center in Pittsburgh. Uber has entered two Caribbean markets - Dominican Republic and Trinidad & Tobago.

Q: A few days ago, one of my friends in Trinidad told me that Uber, the global online transportation network company, started to operate in Port-of-Spain and San Fernando. What will happen when that service comes to Jamaica, as inevitably it will? How will it affect motor insurance and, specifically, the insurance of passengers in those vehicles and other persons?

A: Your questions are intriguing. Parliament is currently in the process of overhauling the country's Road Traffic Act. Among the proposed changes, one is about driving permits.

Of the three classes of licences in the bill, one allows driving "for reward or otherwise".

Persons in the Uber network drive for hire or reward. Have our lawmakers - like their opposite numbers in Trinidad & Tobago - assumed that this country will escape the commotion in ground transportation that is now taking place in 66 countries around the world by companies like Uber?

Perhaps, the local tourism ministry, which has moved quickly to accommodate Airbnb, can be of some help in getting policymakers ready.

Uber has no immediate plans to start operations in Jamaica. The Dominican Republic and Trinidad are currently the only two Caribbean countries in its network. My guess is that after Uber has tested the waters in Trinidad and the authorities there have developed a policy in relation to its business model, market entry into Jamaica will follow.

Uber is also called a ride-sharing or hailing company. It has no fleet of vehicles or employees. Drivers are independent contractors.

A smartphone application, or app, is one of the key parts of Uber's operations. The app, according to caribbean360.com, "allows consumers to submit a request for a driver in the Uber network via their smartphones. The nearest Uber driver is alerted and sent to the location and the information about the vehicle is sent to the customer. The service typically bills a customer's credit card through the app, but last year, Uber opened up a cash option, and both options are available in Trinidad."

Three months after announcing plans to start operations in Trinidad, Uber began to provide service. Government officials there are now scrambling to find out whether the company "can legally operate there".

Vehicles that carry passengers for reward in Jamaica - public passenger vehicles or PPVs - must be licensed and registered as such. This is what happens in Trinidad.

The local PPV industry is regulated by the Transport Authority. PPV operators here must comply with the Motor Vehicles Insurance (Third-Party Risks) Act before regulators give them licences to operate. Insurance to cover passengers and other third parties must be in place before the licences are granted.

What is likely to happen when Uber comes a-calling? Will the response of officials here be similar to those of their counterparts in Trinidad?

The insurance issues in relation to ride-sharing companies like Uber are anything but simple. Private motor policies exclude liability when vehicles are used for "hire or reward", like carrying fare-paying passengers.

My certificate of insurance, for example, says the policy excludes "use for hire or reward" or "use in connection with any trade or business". I interpret this to mean that if I were to become a member of the Uber network and used my vehicle from time to time to carry fare-paying customers in order to earn extra money, there would be no coverage when the vehicle was being used in that manner.

Under the existing rules, it would probably not be inaccurate to say that I was operating a 'robot taxi'.

Ride-sharing companies generally do not provide insurance coverage while drivers are using their vehicles for private purposes. Varying forms of protection are, however, available from them while the driver is logged into their network waiting for a ride request, en route to pick up passengers and while transporting passengers. Coverage terminates when the journey ends, allowing the driver's own insurance to kick in.

The market for the insurance of PPV vehicles in Jamaica has been in decline for many years. Will insurers see the entry of a ride-sharing company like Uber as presenting opportunities or creating threats?

Viewing it as the former could lead to the development of new products to cover the extra risks that will undoubtedly emerge.

On the other hand, persons whose livelihood depend on maintaining the status quo - a large and vocal voting group - like similar groups elsewhere, will see nothing but threats.

How this will turn out in the end is anyone's guess. If the disruption that was caused by the introduction of cell-phone technology in Jamaica was anything to go by, the writing is on the wall.