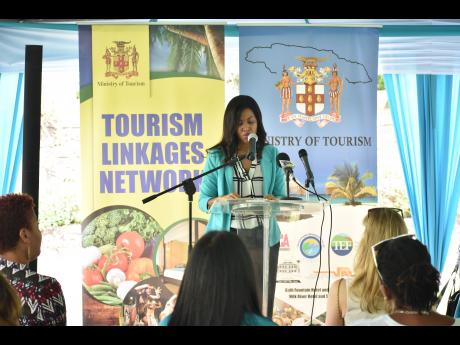 The Ministry of Tourism wants to raise the profile of Devon House among food enthusiasts, while also creating a series of culinary tours across Jamaica in a bet that the country's gastronomic delights, and its rum, can draw additional business from visiting vacationers.

Minister Edmund Bartlett teased the prospect of a rum tour in Trelawny and jerk tour in Portland as he addressed the launch of the first food trail in coffee country on Sunday.

The first trial has the participation of at least 15 businesses, spanning coffee estates, eateries and attractions, all within the shadow of the Jamaica Blue Mountains.

"These are the elements that will bring people and expand the consumption side," said Bartlett, during formalities at Belcour estate, one of four stops incorporated in Sunday's test run of the coffee trail.

"Soon we will be launching Devon House as a gastronomy centre, bringing visitors to the historic site to experience the different culinary offerings through various package tours," the minister said.

Devon House was built in 1881 for George Stiebel, described as the island's first black millionaire. After Stiebel's death, the estate eventually became the property of the Government, which saved it from demolition in 1965, Gleaner archives indicate. After restoration, it reopened in 1968 and today, a number of shops and restaurants, led by the iconic Devon House i-Scream, operate on its grounds.

Under the Tourism Linkages Network (TLN), which was developed to open up markets for local producers in the largely import-dependent hospitality sector, a subgroup called the Gastronomy Tourism Network was appointed in September 2016 by Bartlett to promote Jamaican cuisine.

"Given the vast potential, the gastronomy network is also engaged in mapping a comprehensive list of restaurants, food festivals, food tours and other culinary information, which will allow visitors to easily locate and get information on the island's best culinary experiences," Bartlett said.

Currently, food ranks sixth among top reasons for more than two million tourists travelling by air and another one million by sea to experience Jamaica.

A TLN-commissioned study found that prior to visiting the island, only one in three visitors saw Jamaica as a food destination. But after the visits, perceptions changed somewhat, but not enough to get to a majority, according to Madden-Greig.

"Our aim is that the next time we conduct that survey, we will see the reverse of our initial findings, where the majority of visitors to the island will rank cuisine high in their reason to visit," she said.

The tourism agencies hope to plug the Jamaica Blue Mountain Coffee Trail and the others that follow into the formal tour itinerary for attractions across Jamaica.

It's all part of the larger plan to grow Jamaica's tourism earnings to US$5 billion annually in five years and direct jobs to 125,000. Five pillars of growth underpin the policy new products, new markets, new investments, new partnerships, and renewal of human capital, according to Bartlett.

Currently, there are 55 listings for tours of the Blue Mountains among nearly 480 listings for Jamaica-based tours, according to popular tour site Viator, a subsidiary of TripAdvisor.

These tours range in price from US$60 to more than US$300 per person. And they are produced mostly by individuals offering travellers miscellaneous activities. Contrastingly, there are few official tour operators taking busloads of tourists from hotels to the region.