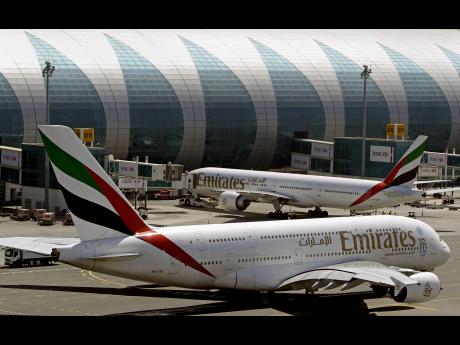 Emirates, the Middle East's biggest airline, said on Wednesday it is cutting flights to the United States because of a drop in demand caused by tougher US security measures and Trump administration attempts to ban travellers from Muslim-majority nations.

The decision by the Dubai government-owned carrier is the strongest sign yet that the new measures imposed on US-bound travellers from the Mideast are taking a financial toll on fast-growing Gulf carriers that have expanded rapidly in the United States.

Dubai was one of 10 cities in Muslim-majority countries affected by a ban on laptops and other personal electronics in carry-on luggage aboard US-bound flights.

The latest travel ban suspended new visas for people from Iran, Libya, Somalia, Sudan, Syria and Yemen, and froze the nation's refugee programme. Like an earlier ban that also included Iraqi citizens, it has been blocked from taking effect by the courts.

Emirates said the reductions will affect five of its 12 US destinations, starting next month. It called the move "a commercial decision in response to weakened travel demand" in the three months since Trump took office.

"The recent actions taken by the US government relating to the issuance of entry visas, heightened security vetting, and restrictions on electronic devices in aircraft cabins, have had a direct impact on consumer interest and demand for air travel into the US," the carrier said in a statement.

Emirates did not provide financial data for its US operations, but said it had seen "healthy growth and performance" there until the start of the year.

In the three months Trump has been in office, however, there has been what it called "a significant deterioration in the booking profiles on all our US routes, across all travel segments.

"Emirates has therefore responded as any profit-oriented enterprise would, and we will redeploy capacity to serve demand on other routes on our global network," it said.

The cuts will reduce the number of US-bound flights from Dubai to 101, down from 126 currently.

Twice-daily Emirates flights to Boston, Los Angles and Seattle will be reduced to once a day. Daily flights to Fort Lauderdale and Orlando will be pared down to five per week.

Like its smaller Gulf rivals Qatar Airways and Abu Dhabi-based Etihad Airways, Emirates has ramped up its US presence in recent years and recently launched a new service to Newark via Athens.