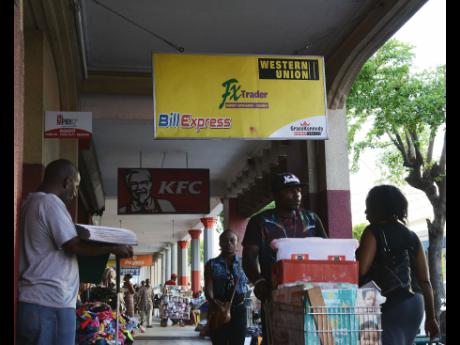 The United States Congress has introduced a bill to impose a fee for remittance transfers to Jamaica and 41 other foreign countries, ostensibly to fund the building of a border wall with Mexico.

The bill, entitled Border Wall Funding Act of 2017, is intended to amend the Electronic Fund Transfer Act. It is sponsored by Republican Mike D. Rogers and was introduced in the US House of Representatives on March 30, according to information posted on the congress.gov website.

Lasco Financial Services, agent for MoneyGram in Jamaica, views the developments of the bill as unfair and one which will increase the cost of providing the service, provided it becomes law.

"If this were to be enacted, it would effectively increase the cost of remittances, reduce the amount for the beneficiary, or motivate senders to find an alternate method of getting the funds to their families," managing director of Lasco Financial Services, Jacinth Hall-Tracey, said in response to Gleaner Business queries on Tuesday.

She indicated that the most significant impact would be on the family receiving, since the sender may not be able to absorb the increase.

Don Wehby, group chief executive officer at GraceKennedy, agents for Western Union in Jamaica, said he would get the position of the money-transfer company and respond, but he did not up to press time.

The bill still requires approval by Congress, the Senate and United States President Donald Trump before it becomes law. Trump had campaigned on a promise to build a border wall with Mexico and get that country to pay for it. However, Mexico decided it will not pay.

According to information posted at congress.gov, on the same day the bill was introduced, it was referred to the House Committee of Financial Services, in addition to the Committee on Foreign Affairs and the judiciary for a period to be subsequently determined by the Speaker.

"... Such remittance fees shall be submitted to the Treasury to be expended for the purpose of improving border security," said the Bill.

The bill also stipulates that evasion of the remittance fee carries a penalty of up to US$500,000 or twice the value of the funds involved in the transfer, whichever is greater, or imprisonment for up to 20 years or both.

It also provides that any foreign country that, in the joint determination of the Secretary of Homeland Security, the Secretary of the Treasury, and the Secretary of State aids or harbours an individual conspiring to avoid the fee shall be ineligible to receive foreign assistance and to participate in the visa waiver programme or any other programmes.

Lasco's Hall-Tracey said that "if the funds go into informal channels, then it becomes harder for the financial system to regulate the flow of funds. Remittances positively contribute to the education, healthcare and general economic maintenance of the recipient family". she said.

Overall it would result in "a slight decline or slower growth" for the island, she said, as remittances would decrease in frequency.

"Since remittances are a lifeline and are really to fulfill obligations, the transfers will continue, but the per person transfers will decrease. If this happens, of course, there would also be an impact on the foreign exchange earnings for the country and all the other associated effects once there is a decline in currency flows," Hall-Tracey said.

Asked if it was fair or equitable for Jamaica to finance US/Mexico border control? the Lasco Financial Services executive said: "Absolutely not, but the bill is obviously targeted at immigrants."

Jamaica receives some US$2billion annually from remittances, which makes it a major source of foreign exchange.