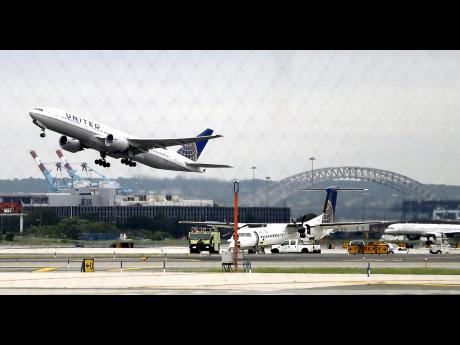 File
In this July 25, 2013 file photo, a United Airlines plane takes off from Newark Liberty International Airport in Newark, N.J.

United Airlines is reviewing the handling of a giant rabbit that died after it was shipped across the Atlantic on one of the carrier's flights, adding to a growing list of customer complaints for the US carrier.

Distraught breeder Annette Edwards told The Associated Press by phone Wednesday that a veterinarian checked Simon, a 10-month-old, three-foot (metre)-long continental rabbit, shortly before the animal was put on a flight from London's Heathrow airport to Chicago's O'Hare, before it was set to continue on to Kansas City.

"Simon had his vet check just before getting on the plane," she said from Worcestershire in central England. "He was fit as a fiddle."

Edwards has said Simon is the offspring of Darius, which the Guinness World Records lists as the world's longest rabbit at 4 feet 3 inches (1.22 metres). Simon had been purchased by a celebrity whom Edwards did not identify.

United spokesman Charles Hobart said the airline is reviewing its handling of the animal. The animal was alive and showed no signs of distress upon landing, but died at a company-run pet holding facility at the airport, Hobart said.

Hobart said the airline offered compensation to the breeder but would not disclose the amount.

United had the second-highest level of animal deaths and injuries of any US airline last year, or 2.11 per 10,000 animals transported, according to US Department of Transportation figures. Only Hawaiian Airlines was worse at 3.99, the result of three deaths among the 7,518 animals it transported.