Bank of Jamaica to prepay US$112M certificates of deposit 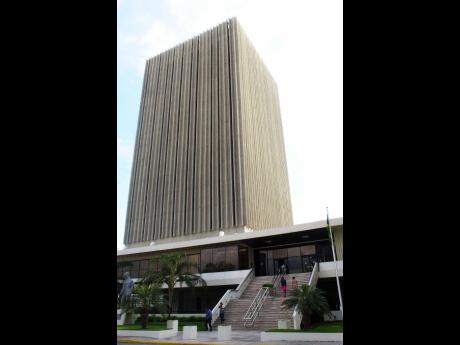 File
The Bank of Jamaica at Nethersole Place, Kingston.

The Bank of Jamaica (BOJ) served the market notice last Friday of its intention to exercise the option to prepay foreign currency-denominated certificates of deposit valued at just over US$112 million to holders of those instruments in July.

In accordance with the contractual three-month notice period applicable to each instrument, repayment of the principal amount will be made on Friday, 28 July 2017, the Bank said in a release.

"The Bank considers it prudent to redeem these instruments at this time as they feature coupons that are higher than current market rates for similar instruments," the central bank said.

The prepayment will also inject over US$112 million in US dollar liquidity into the market, it added.

The BOJ said that notwithstanding the three-month prepayment notice, it intended to make an offer to registered holders of these instruments to immediately redeem all or part of the principal amount. That offer is to be made in a separate notice.

"Jamaica's foreign-exchange reserves are at comfortable levels," the central bank said. "The Net International Reserves are currently at an all-time high of US$2.9 billion. Under the current precautionary stand-by arrangement with the International Monetary Fund, focus is placed on the level of non-borrowed reserves which, at US$1.9 billion, are currently well ahead of the semi-annual targets for 2017," it added.

In January, the BOJ said it would prepay foreign currency-denominated CDs totalling approximately US$256 million (US$158.6 million and £79 million) to holders of those instruments that month and followed a call notice issued by the Bank on October 25, 2016 in accordance with the terms of the instruments.

The BOJ said then that it would be continuing its regular monthly issues of US dollar CDs.

It also said that when combined with the prepayment, the issues will advance the Bank towards the achievement of its target to reduce the stock of outstanding US dollar CDs to US$900 million by March 31, 2017.