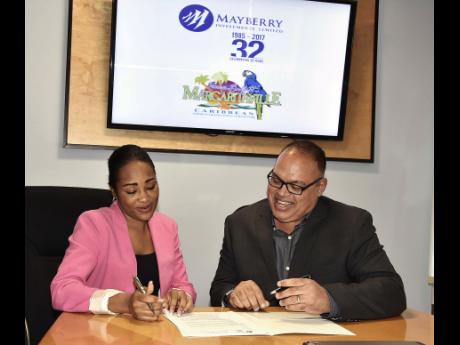 In a deal signed earlier this month, Mayberry will now act as financial advisor to the Jamaican hospitality outfit. The company sells the bulk of food and beverages at the Sangster International Airport in Montego Bay, with annual revenues at US$14 million (J$1.8 billion). The company began operations in 2001 and is today run by Dear, chairman and chief executive officer.

Mayberry chief executive officer Gary Peart indicated that the move to raise funds comes as the company plans to expand, but declined to give specifics. Peart, however, said that the company would consider raising funds via private placement or listing on the Jamaica Stock Exchange (JSE).

With 30,000 square feet of space allocated for food and beverages, the company employs over 270 full-time crew members, with additional persons hired during peak travel seasons.

"We believe that this company is poised for growth, not only because it has negotiated such a lucrative space within which to operate in such a premium location, but also because the hospitality industry has been trending positively and is expected to continue to do so as long as tourism remains one of the key drivers of our economy," stated Peart in a joint release on Friday.

Peart also lauded the leadership of the company for its innovative concept and key strategic decisions.

"Our group remains focused on providing comprehensive food, beverage and entertainment options for major transportation hubs. We've learnt the key to continued growth and success always comes back to the guest experience. Sangster International Airport services nearly four million passengers yearly, and we understand their time is limited and extremely valuable," said Dear in the release, adding that he is equally enthusiastic about the potential for further growth and expansion for his organisation.

The Express Catering group currently manages the operation of 17 brands across 23 locations within the Sangster International airport.

Last year, Dear gained full control of the company after paying nearly US$4 million for the 25 per cent stake held by Barbados-based Goddard Enterprises.

"We are already expanding our brand portfolio in anticipation of the proposed airport expansion. We have plans to add globally recognised brands in the future with some expected to begin operations within the year. Through a collaborative effort of executive leadership, operations, brand partners and more than 270 front-line crew members, we will redefine the airport experience from arrival to departure," stated Dear.