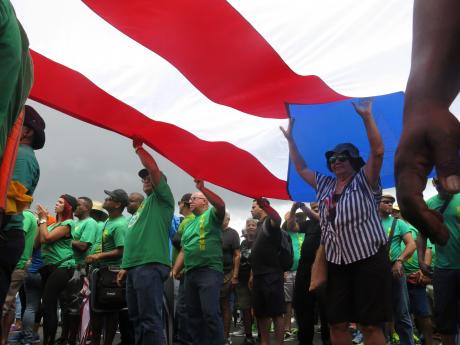 AP
People carry a large Puerto Rican flag as they protest looming austerity measures amid an economic crisis and demand an audit on the island's debt to identify those responsible, in San Juan, Puerto Rico, Monday, May 1, 2017. (AP Photo/Danica Coto)

Bondholders filed to sue Puerto Rico on Tuesday in the first legal challenges to hit the United States territory after a freeze on litigation that protected it from lawsuits expired amid a deep economic crisis.

A group representing those who bought a portion of the US$16 billion worth of bonds backed by Puerto Rico's sales tax, said in its lawsuit that a government plan to cut its US$70-billion debt is unconstitutional. The group accused government officials of strong-arming it into what it called "unfair, unjust, and illegally punitive terms".

Another lawsuit filed by Ambac Assurance Corp accuses the government of illegally retaining US$300 million owed to bondholders. The company said it also has been forced to pay more than US$52 million in insurance claims as a result of ongoing defaults by Puerto Rico's government.

The lawsuits are expected to be among several filed as bondholders seek to recover the money they invested in Puerto Rico government bonds. Puerto Rico already faced about a dozen lawsuits before the litigation freeze was implemented as part of a rescue package that US Congress approved last year.

The newest suits come after the administration of Governor Ricardo Rossello failed to negotiate any deal with bondholders after the May 1 deadline of the litigation freeze. Puerto Rico has defaulted on US$1.3 billion of principal owed since the previous governor declared the US$70-billion public debt load unpayable in June 2015.

Puerto Rico Chief of Staff William Villafane told The Associated Press just hours before the freeze expired that the government preferred to reach a deal with bondholders. But he said embracing a bankruptcy-like process could be an option if negotiations fail.

"At least essential services would be guaranteed," he said.

A spokeswoman for Governor Ricardo Rossello said there would be no immediate comment other than a statement issued late Monday in which the administration said it was pursuing consensual agreements but that other options are on the table.

"And Governor Rossello must either get on board or get out of the way," she said, saying she voted in favour of a rescue package last year so Puerto Rico could restructure its debt.

"Puerto Rico is no longer shielded from creditors rushing to the courthouse to lay claim to its assets - that includes the beaches, pieces of art, historical furniture and any assets, whether they are nailed down or not. The people of Puerto Rico have had enough. The governor and the board have a moral imperative to act immediately."

Puerto Rico could announce a historic, court-supervised restructuring for a portion of its US$70-billion debt. By comparison, the US city of Detroit had US$9.3 billion of obligations when it filed for bankruptcy in 2013 in the biggest US municipal bankruptcy ever.

Puerto Rico's situation is more dire than Detroit's because the city, in part, had a firm set of rules in bankruptcy court, an option that the US territory doesn't have, said Greg Clark, head of municipal research at Debtwire.

He also noted that the government has to walk a fine line with bondholders amid negotiations.

"They're going to need them again at some point," he said. "Where that sweet spot is, nobody exactly knows."

The government on Saturday offered to pay 50 cents on the dollar to holders of general obligation and sales-tax bonds backed by Puerto Rico's constitution. Bondholders rejected the offer.

A fiscal plan for Puerto Rico sets aside US$800 million a year for debt payments, a fraction of the US$35 billion due in interest and payments over the next decade.