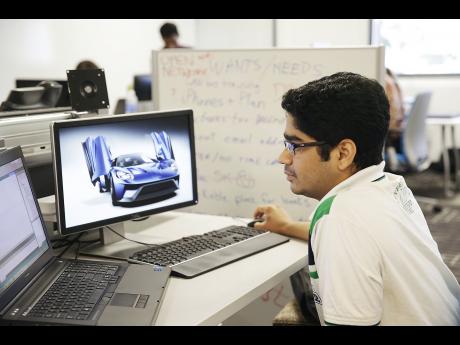 AP
In this photo taken August 13, 2015, a research engineer works on image processing at the Ford Motor Company Research and Innovation Center in Palo Alto, California. The convergence of cars and technology is blurring the traditional geographical boundaries of both industries and other bastions of economic activity are also changing due to technologial forces.

Disruption is considered to be a virtue of modern technology. Indeed, 'disruption' is a passionate cry in Silicon Valley.

Vast industries have been dismantled due to the disintermediation effects of artificial intelligence (AI), data processing and cloud storage. Fixed telephony, retailing, travel agencies and taxi services are a selection of the sectors that have been devastated by a handful of start-ups, such as WhatsApp, Amazon, Kayak and Uber.

Other bastions of economic activity, such as medical consultancy, Hollywood, finance, print media, food services, education and trucking will soon give way to the technological dreadnought.

New protocols and programs can reduce or eliminate a universe of intermediaries, thus allowing them to provide similar services at much lower costs. This is akin to a deinstitutionalisation process that provides a more direct relationship between the initial supplier and the end consumer.

While economists fret about the implications that this will have on employment, income distribution and inflation, we are also witnessing the havoc it is wreaking on the global political system.

The most visible victims have been traditional political parties. Even though political parties are an essential component of the modern body politic, they are relatively new. Aristotle and Plato discussed various forms of government, but their focus was on the types of organisations, such as aristocracy, monarchy, polity, tyranny, oligarchy and democracy, with the latter three being inferior arrangements.

Parties did not appear on the political scene until the latter half of the 17th century, as power devolved from absolutism to more representative constructs. The transformation accelerated during the 18th and 19th centuries, as the industrial revolution took off and economic forces were regrouped according to the factors of production.

Parties became vehicles to aggregate the preferences of groups. The competing views of land, labour and capital became the schisms for which parties could represent types of labour (skilled versus unskilled), regions (rural versus urban), religions (Protestant versus Catholic) and business interests (tradables versus nontradables).

For the next two centuries, political parties developed into machines that not only represented the views of their constituents, but promoted the personal ambitions of individual party members. They became a Gordian knot of back-room deals, nepotism and corruption.

Interestingly, the demise of the political party system started in the developing world. Powerful political machines, such AD in Venezuela, APRA in Peru, the Liberals in Colombia, the Concertacion in Chile and the Peronists in Argentina have been in decline for some time. Upcoming elections in places such as Turkey, Mexico and Brazil will see the implosion of the remaining machines.

However, the more interesting development has been the collapse of the political party system in the developed world.

The 2016 election in the United States marked the demise of the Republican and Democrat parties. The Brexit vote did the same to Labour and the Conservatives in the United Kingdom. Last week witnessed a similar blow to the major parties in France. Other developed countries, such as Italy and Spain, are in political disarray.

One of the reasons for the chaos is the dysfunctionalism and inefficiencies of the parties, which refocused their efforts on perpetuating the personal ambitions of party officials rather than the needs of their constituencies, but it was also due to the disruptive effects of new technologies.

AI, robotics and automation have blurred the traditional lines between land, labour and capital. The role of labour is disappearing, while land and capital have become dominant. It has led to the emergence of new corporate titans, which have unconventional needs and preferences. Moreover, the aggregation role played by political parties, which used to be done though conventions and caucuses, has been replaced by social media.

Political leaders can also communicate directly to the electorate through channels such as Twitter, Instagram, and podcasts, eschewing party bosses and partisan newspapers. Freed from the shackles of the traditional parties, a universe of independent candidates has proliferated, breathing new life into the democratic process.

Unfortunately, Aristotle considered democracy to be one of the inferior forms of government, because it was nothing more than mob rule. This is a situation where the most popular policies are those that appeal to the lowest common denominator. Hence, it is little wonder that we have witnessed the spread of populism, along with a proliferation of wild-haired policy propositions.

Just as was the case during the Industrial Revolution, when technological leaps triggered seismic shifts in the economic and political landscape, the Information Revolution is leading to another major sea change in the global political system. In other words, this is the end of the party, no pun intended.