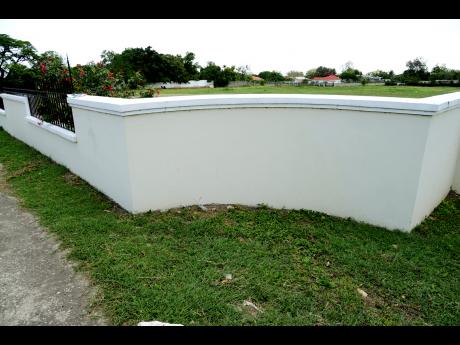 Rudolph Brown
The 4.25-acre property owned by Sagicor at Seymour Avenue in the Golden Triangle of St Andrew.

Sagicor Property Services Limited will decide by year end whether to sell or develop land it owns at Seymour Avenue located within the upscale zone known as the Golden Triangle, notwithstanding the for sale sign mounted on the property.

Sagicor will sell the property if it gets the type of offer from a developer that it finds irresistible, but it is also not ruling out the execution of its own near decade-old plan to build townhouses there, if the bids for the property disappoint.

Currently, there's an ongoing redesign of the original concept of the development, which was to build town houses for high-income individuals. Now its target will be middle-income buyers, in a nod to the realities of the real-estate market and the affordability of housing.

"We are going to make a final decision on the property by year end," said Rohan Miller, CEO of Sagicor Investments Jamaica Limited and Sagicor Real Estate X Fund Limited.

"We will decide whether to develop or to sell," he told Gleaner Business last Friday.

Sagicor holds two parcels of land on Seymour lots 23 and 33. The lots sit on some four and a quarter acres of development lands within proximity to schools, offices, retail shops, malls, hospitals and gardens.

He also said targeting middle-income individuals would better position the project for rapid sale of the units, were Sagicor to develop the 4.25-acre property itself.

"We are still looking to do the development, but if we get a good offer, we would sell," he said.

Sagicor, then Life of Jamaica, bought the lands at Seymour Avenue in 2007. It subsequently disclosed plans to develop around 32 two-bedroom apartments and 23 three-bedroom town houses on the 4.25-acre property, which it would sell for $25 million to $40 million each.

The estimated investment at the time was $1.6 billion.

In 2015, Sagicor got approval for two real-estate projects on Seymour Avenue, the smaller of which was expected to get off the ground by early 2016, but is yet to break ground.

The value of the greenfield property now up for sale was not disclosed, but real estate experts say it is worth between US$6 million and US$7 million.

"It would sell somewhere in that region, if selling the land without any approvals," said LaMaison Property Services' Edwin Wint last Friday.

Wint also theorised that the redesign of the project target to middle-income buyers would likely result in a reduction of the number of three-bedroom units in favour of two-bedroom residences. That would put the development in the "sweet spot of the market", he told Gleaner Business.

Towards the end of 2015, Digicel sold a five-acre lot in the Golden Triangle to Sandals Resorts. The acquisition price was never disclosed, but Digicel only struck a deal for the property after it had cut the listing price from US$8 million to US$6 million.