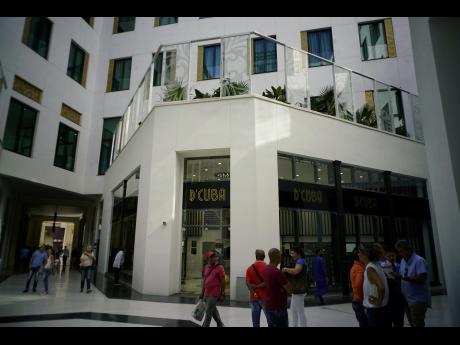 File
People look at luxury storefronts at the Manzana de Gomez Kempinski five-star hotel in Havana, Cuba, on Monday, May 8. Along the bisecting galleries of the Manzana’s ground floor, the military’s retail arms TRD Caribe and Cimex host the luxury brands along with Cuban stores selling lesser-known but still pricey products aimed at Cuba’s small but growing upper-middle class, like US$6 mini bottles of shampoo and sets of plates for more than US$100. 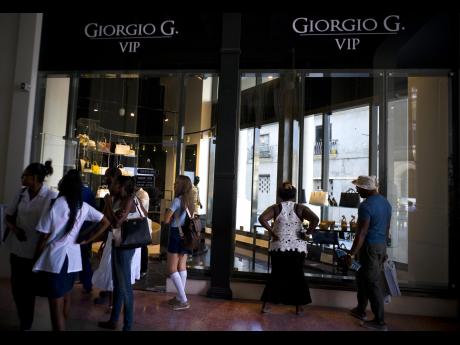 AP
People look at the storefront window of a luxury store at the Manzana de Gomez Kempinski five-star hotel in Havana, Cuba, on Monday, May 8.
1
2

The saleswomen in L'Occitane en Provence's new Havana store make US$12.50 a month. The acacia eau de toilette they sell costs US$95.20 a bottle. Rejuvenating face cream is US$162.40 an ounce.

In the heart of the capital of a nation founded on ideals of social equality, the business arm of the Cuban military has transformed a century-old shopping arcade into a temple to conspicuous capitalism.

With the first Cuban branches of L'Occitane, Mont Blanc and Lacoste, the Manzana de Gomez mall has become a sociocultural phenomenon since its opening a few weeks ago, with Cubans wandering wide-eyed through its polished-stone passages.

Older Cubans are stunned at the sight of goods worth more than a lifetime's state salary. Teenagers and young adults pose for Facebook photos in front of store windows, throwing victory signs in echoes of the images sent by relatives in Miami, who pose grinning alongside 50-inch TV sets and luxury convertibles.

Gaviota, the military's tourism company, is in the midst of a hotel-building spree. The military corporation Cimex, created two decades ago, counts retail stories, auto-rental businesses and even a recording studio among its holdings. The military retail chain TRD has hundreds of shops across Cuba that sell everything from soap to home electronics at prices often several times those in nearby countries.

The military-run Mariel port, west of Havana, has seen double-digit growth fuelled largely by demand in the tourism sector, and the armed forces last year took over the bank that does business with foreign companies, assuming control of most of Cuba's day-to-day international financial transactions.

On a recent weekday, Oswell Mendez and the members of his hip-hop dance group De Freak posed for their Facebook page in the centre of the Manzana, on the spot where a bust of early 20th-century Cuban Communist leader Julio Antonio Mella sat before it was removed in the building's multiyear renovation.

"This is a high-end spot, really nice," said Mendez, 24. "It's something we haven't seen before."

The five-storey Manzana sits off the Prado, the broad, tree-lined boulevard that divides the colonial heart of the city. The upper floors are a five-star hotel opening in early June that is owned by the military's tourism arm, Gaviota, and run by Swiss luxury chain Kempinski. Along the bisecting galleries of the Manzana's ground floor, TRD Caribe and Cimex host the luxury brands along with Cuban stores selling lesser-known but still pricey products aimed at Cuba's small but growing upper-middle class, like US$6 mini bottles of shampoo and sets of plates for more than US$100.

"This hurts, because I can't buy anything," said Rodolfo Hernandez Torres, a 71-year-old retired electrical mechanic who lives on a salary of US$12.50 a month. "There are people who can come here to buy things but it's maybe one in 10. Most of the country doesn't have the money."

L'Occitane, Lacoste, Mont Blanc and the Cuban military's business wing did not return requests for comment.

With its economy in recession and long-standing oil aid from Venezuela in doubt, the Cuban government appears torn between the need for market-based reforms and the fear of social inequality that would spawn popular dissatisfaction and calls for political change.

With other sectors declining, Cuba's increasingly important tourism industry is under pressure to change its state-run hotels' reputation for charging exorbitant prices for rooms and food far below international standards. The Manzana de Gomez Kempinski bills itself as Cuba's first real five-star hotel, and the brand-name shops around it appear designed to reinforce that.

The hotel is earning positive early reviews, but many tourists say they find the luxury mall alongside it to be repulsive.

"I was very disappointed," said Jeannie Goldstein, who works in sports marketing in Chicago and ended a six-day trip to Cuba, her first, on Saturday.

"I came here to get away from this," she said. "This screams wealth and America to us."

The Prado boulevard was the scene of Cuba's previous record for a state-sponsored display of exorbitant consumerism. Last May, the government closed the boulevard for a private runway show by French luxury label Chanel for a crowd that included actors Tilda Swinton and Vin Diesel and supermodel Gisele Bundchen.

The temporary privatisation of a street for an international corporation built on exclusivity and luxury generated widespread revulsion in Cuba and an unusually angry reaction among writers and intellectuals. Cuba's culture minister resigned two months later, with no reason given for his departure.

Many other Cubans were delighted by Chanel and adore the Manzana de Gomez, saying it's the sign the country knows its future depends on opening itself to foreign wealth.

"These stores are for millionaires. Attracting tourists with money, that's development, capitalism," said Maritza Garcia, a 55-year-old airline office worker. "Everything that's development is good. Bit by bit, the country is lifting itself up. We're a socialist country, but the economy has to be a capitalist one.