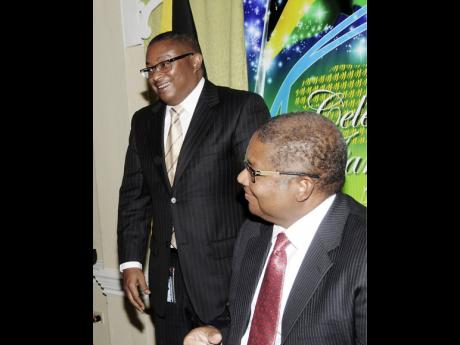 File
In this 2012 photo, brothers Konrad Mark Berry (standing) and Christopher Berry are seen at Mayberry's annual general meeting in Kingston. A company owned by the brothers has been contracted to manage Mayberry's investment portfolio. 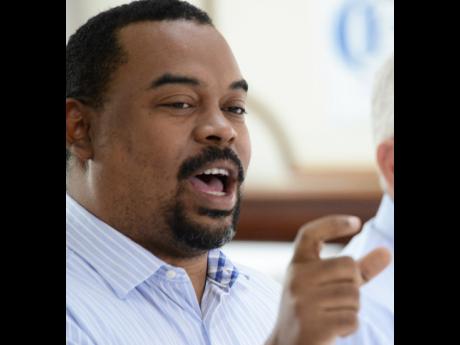 Mayberry Investments Limited, MIL, has added a new layer that will result in the company's investment portfolio being managed by a related firm controlled by its top shareholders, the Berry siblings.

Mayberry West Indies Limited, MWI, is used by MIL as a vehicle for its own investments. In a deal sealed February 15, but retroactive to January 1, 2017, MWI contracted MAML to manage its portfolio, according to financial disclosures on the stock market.

On Wednesday, Mayberry Investments CEO Gary Peart told the Financial Gleaner that the contract with MAML related only to MIL's own portfolio of investments and that it was done "to maximise shareholder value". He is also contending that the additional management layer makes Mayberry a more transparent company.

"Let us be clear, this is not an invention on the part of Mayberry. This is a model used right across the world, including Jamaica," Peart said.

MAML was incorporated in St Lucia in 2006. According to Peart, the offhsore company is a subsidiary of Mayberry with its own board and a small staff operating out of the St Lucia capital, Castries.

Mayberry Investments will ask shareholders to "authorise directors to reorganise Mayberry West Indies Limited" at its upcoming annual general meeting scheduled for June 28, according to Resolution No. 7 of the AGM notice, in what appears will be a vote to approve the changes already in effect.

The job that MAML will now do was previously carried out by executives employed to MIL, inclusive of executive chairman Chris Berry and executive vice-chairman Konrad Mark Berry. The brothers are both top shareholders in Mayberry Investments with a combined 76.5 per cent stake, as well as the owners of MAML, through which, Peart said, they will now operate.

MAML will earn a flat fee of 0.5 per cent of the net value of Mayberry Investment's portfolio, which Peart said is currently valued at $6 billion. The fee - which would amount to $30 million at the current value of the portfolio, Financial Gleaner estimates - will accrue quarterly but paid to MAML on an annual basis.

So far this year, Mayberry has reported an 80 per cent spike in comprehensive income to $521 million amid a 98 per cent plunge in net profit to $1.7 million in the first quarter.

Still, the company declared a dividend of 23 cents per share, or $276 million, to be paid out to shareholders on June 28. It eclipses the total dividend of $264 million paid out in 2016.

Comprehensive income is a composite of net profits and any increased unrealised value that can come from the increase in the value of shares, bonds or any other financial instruments that are invested as part of a portfolio.

"Mayberry West Indies was formed and it holds the long-term investments of Mayberry. As we continue to evolve in how things are dealt with, this note is saying we have now gone further and created a structure where MWI has to be managed," Peart said, referencing Note 30 in MIL's latest annual report.

Regarding the fee structure: "Our analysis was done off the various management fees that are charged and a determination was made for these numbers," he said.

There is no penalty built into the MAML contract were the portfolio to lose value, Peart acknowledged. He rationalised that portfolio managers need to be compensated for their skill in assessing risk and making the right investment calls, as is done across the world, and that it is in the manager's best interest to make the right moves.

"We are managing a portfolio that will generate an increase over time. I am incentivised to ensure that we continue to create value, because that is how we are going to get paid," he said.

Peart says Mayberry has its odds on equities.

"At this point, the management of the portfolio has structured it with a big skew towards equities, and that is because management is of the opinion that Jamaica is going to be on a sustained growth profile for the next four to five years," he said.