A year later, President Temer’s promises to Brazil on hold or lost 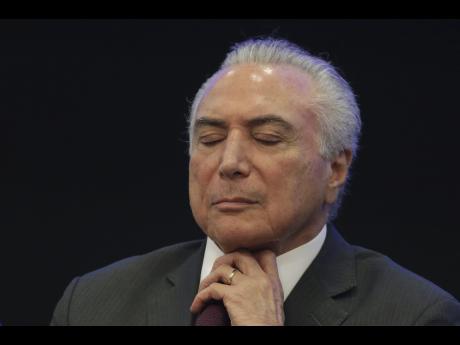 AP
Brazil's President Michel Temer closes his eyes during a event at the Brazilian Institute of Research in Brasilia, Brazil, Monday, May 8, 2017. Temer promised to unify a fractured society, pull the economy from recession and create jobs. Now, Temer is very unpopular, unemployment is up and his reform agenda is very much in doubt. (AP Photo/Eraldo Peres)

One year ago this Friday, then Vice-President Michel Temer took over Brazil's presidency from Dilma Rousseff, who was suspended and later permanently removed from office after a brutal impeachment fight that exposed deep divisions in Latin America's largest nation.

In his first speech to the nation, the career politician, known for his deal-making skills in Congress, promised to unify Brazil and pull the economy out of recession. Below are excerpts of that speech and a look at what has happened with those promises.

"My first word to the Brazilian people is trust"

Brazilians don't trust Temer, according to numerous polls. In the most recent by the Datafolha Institute, only nine per cent approve his job performance a year into office, four points below Rousseff at the time she was suspended. Seventy-one per cent of those polled reject the reforms he is proposing. If he ran for re-election in 2018, only two per cent would vote for him, according to the poll, which interviewed 2,781 people between April 26-27 and had a margin of error of two percentage points.

However, there is a small improvement in trust in the economic recovery. According to think tank Fundacao Getulio Vargas, consumer confidence stood at 82 points in April, nine points higher than the same month one year ago. A business index points to a 0.5 per cent growth of the economy in 2017. By comparison, Brazil's gross domestic product contracted 3.6 per cent last year.

"It is urgent to pacify the nation and unify Brazil"

In addition to low approval ratings, Temer has struggled to muster support anywhere outside Brasilia or achieve social peace and unity. His attempts to overhaul labour laws and the pension system triggered Brazil's first general labour strike in 20 years. He has faced protests throughout the year, and was jeered at the opening and closing ceremonies of the Rio Olympic Games.

Temer's bid to unify Brazilians was also undermined by his initial appointment of a Cabinet of all white men, underscoring racism and sexism in a country where more than half identify as black or mixed race. He has since added two women to the Cabinet. However, what many Brazilians interpreted with his initial appointments - that the government was by and for the white elite - has largely stayed with his administration.

To his credit, Congress is considering major legislation in several areas. That is a big improvement compared to the end of Rousseff's time, when most activity in Congress had come to a halt.

"Citizens, however, will only have jobs if the industry, commerce and service sectors are doing well"

Brazil had 11 million unemployed people when Temer took over. Now there are 14 million. Brazil's minimum wage was only adjusted for inflation this year, the first time its buying power hasn't been raised since 2003. It is now $295 a month, very little in an expensive country.

Businesses have yet to find much reason for excitement. Industrial output, which measures the amount of goods produced and services acquired by manufacturers, grew 1.1 per cent in March compared with the same month in the previous year.

Inflation has fallen sharply under Temer, from more than 10 per cent to around five per cent. However, economists say the underlying cause is that Brazilians are not buying. From January 2016 to January of this year, retail sales dipped 5.9 per cent, according to government figures.

"We will keep social programmes. These projects worked well"

Temer's administration has cut or blocked 1.1 million families from the flagship social programme Bolsa Familia, or Family Purse. The programme provides a small income to poor families who send their children to school and keep them under a doctor's supervision, according to government figures.

Data released to The Associated Press, after a request was made under Brazil's freedom of information law, shows that most cities affected by cuts to the Family Purse programme were based in the poorest regions of Brazil, the north and northeast. Those areas are strongholds of Temer's adversaries, including former President Luiz Inacio Lula da Silva, the leader in opinion polls on the 2018 election.

"There are issues, my friends, that are controversial, such as labour and pension reform"

Temer is betting his presidency and legacy on ushering in major overhauls of both, but he is struggling to gain traction.

He managed to get a bill with major changes to Brazil's labour laws through Congress' Lower House, but its chances in the Senate are unclear. The bill stipulates that agreements between employers and employees prevail over Brazil's labour laws, which could lead to cuts in vacation time and longer working hours.

Neither chamber has voted on Temer's pension-reform proposal. His original bill, which, among other things, would have raised the retirement age and made it the same for both men and women, has been severely watered down.

Analysts say even more cuts will have to be rolled back if it has any chance of passing. Meanwhile, there are doubts about Congress' willingness to enact deeply unpopular labour legislation a year before elections.


"The 'car wash operation' (investigation) has become a reference and, as such, it must be protected"

At least publicly, Temer has been careful not to appear to be trying to derail the mega-investigation into billions of dollars in kickbacks to politicians and other public officials for the awarding of construction contracts.

Over the last three years, dozens of Brazil's top business executives and politicians have been jailed in the probe.

At the same time, eight of Temer's Cabinet ministers are currently being investigated for corruption related to Brazilian construction company Odebrecht, one of the central companies that participated in the kickback scheme. Temer has said he will only fire them if they are charged.

Temer himself has been fingered in the probe for allegedly receiving illegal campaign contributions. He denies wrongdoing and, as sitting president, can be tried only for crimes committed during his presidency.