David Jessop | Why the concerns of Caribbean youth matter 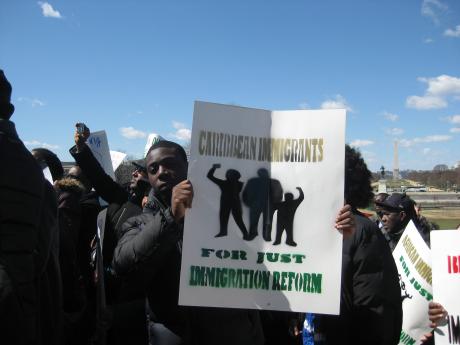 In this March 2013 file photo, Caribbean youth press their case for inclusive immigration reform at a Washington DC rally in the United States.

In much of the world, young people feel economically marginalised, politically alienated and in a struggle against insecurity and inequity.

In the Caribbean, it is little different. Lack of opportunity, the absence of generational change, high levels of unemployment, discrimination based on gender or sexual orientation, and the slow pace of change, are abiding aspects of the lives of many in the younger generation.

However, unlike their counter-parts in other regions of the world, where frustration with the political class and anger with the old order have led to new political movements and protest, no similar region-wide or sustained manifestation of dissent have occurred. Instead, in recent years, protests have been limited and disconnected.

Part of the answer as to why this should be seems to lie in the Caribbean's smallness and fragmentation. While life in micro-states offers proximity to political and economic opportunity, size also imposes limits on dreams and aspiration. When set alongside the seemingly boundless prospects for material gain in North America and United States cultural penetration, the same smallness is almost guaranteed to heighten frustration with the slow pace of national development.

The consequence is a sense of disillusion among many young people, and a desire by many of the best, brightest and better educated to seek avenues of escape to other parts of the world.

Dr Terri-Ann Gilbert Roberts, a UWI/SALISES research fellow who was recently nominated by Caribbean youth to be the UN Secretary General's Youth Envoy, and who is engaged in research, policy and programme formulation on issues affecting children and youth, speaks with knowledge of the topic.

She believes that while young people in the anglophone Caribbean may not express their frustrations in traditional highly-visible ways, their concerns are palpable, and can be seen and heard in their online and offline conversations in their communities, and in student and youth organisation debates.

She says that the reason the views of Caribbean youth do not manifest themselves in large-scale antigovernment street protests of the type seen in other parts of the Americas, is not because young people do not share the same concerns about their future, the inclusiveness of Caribbean society, or the accountability of public officials.

Instead, she believes that because the anglophone Caribbean has relatively stable democratic traditions, freedom of expression, a free press, and smallness, young people feel that their shared concerns are known, but are not adequately addressed.

She argues that because "many young people have lost confidence in the capacity of formal governance processes and structures to address their concerns", they "question the practical value of investment in large-scale protests in which their voices may be ignored and their actions will not influence change".

While others believe that the absence of protest in the region is a good thing and reflects the homogeneous nature of Caribbean society, the absence of any real basis for public dialogue with those who may lead or vote for tomorrow's Caribbean says much about the region's malaise and, more important, its future development.

In common with other societies, many in the older generation in the Caribbean seem to want to hold on to the past and the status they have achieved, sometimes making it seem that all that matters is the jealous guarding of privilege.

Unfortunately, this has resulted in an absence of progress, and bestows legitimacy on defending the political and economic status quo. The consequence is that many nations and regional structures remain locked into thinking that is well past its sell by date, whether it be in relation to politics, the public sector, or business.

The effect is to create responses that are inward looking, deeply protective, and lacking leadership, or ambition when it comes to the future for the young. It is reflected in the falling youth voter numbers in many Caribbean nations.

Dr Gilbert-Roberts argues that these frustrations have resulted in a clear majority of Caribbean young people refocusing on what she describes as "self-regulated, constructive and pragmatic spaces for online and offline dialogue" to form a basis for their everyday politics.

Putting this another way, she says that in the Caribbean, young people are now seeking change in those parts of society over which they have power and influence. She cites as the political expression of this, youth movements in some parts of the region that are calling for public transparency and accountability which seek to audit government processes rather than make generic criticisms of government; environmental clubs; youth clubs that offer homework programmes for children; and offers of peer counselling and mentorship.

There are, of course, regional variations.

In the Dominican Republic, there is generational mobility but this largely only applies to the well-educated sons and daughters of the elite and the county's expanding professional classes. In Cuba, its Government has belatedly recognised the need to make strenuous efforts to include young people who want more in the way of personal freedoms and materially, while keeping the country's social gains.

In other parts of the region, there are exceptional, often female free thinkers in politics and business. There are young entrepreneurs in the services sector and agriculture who see Caribbean opportunity in new ways.

There are very able individuals who in private acknowledge they would seek positions of leadership if politics was less tribal. And there are also large numbers of young men who feel uncertain about their place in society and feel threatened.

Dr Gilbert-Roberts, and others who prefer to speak off the record, observe that the level of frustration may now be growing faster than the capacity of youth groups to respond to the needs in their communities.

"We are already seeing increasing numbers of peaceful civil society protests involving young people: for example, marches in Jamaica against violence against children and women, alongside more disruptive protests, for example in Dominica in relation to oppositional politics", she observes. "If and when these youth movements join up, and connect with the broader frustrations of other segments of the society, we will begin to see new and more visible forms of expression which could also become catalysts for change."

If the concerns of the region's young people are not recognised and embraced by its political and business class, change and new thinking could well be driven by unmanaged events.