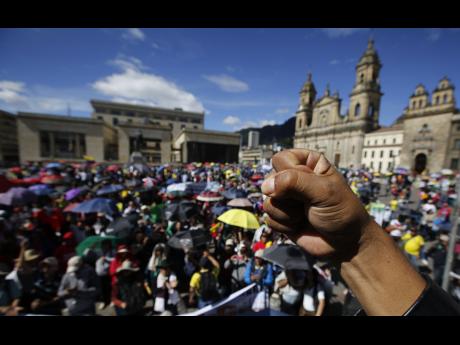 AP
Union workers gather in Bolivar Square for an anti-government protest in solidarity with a nation-wide teachers' strike in Bogota, Colombia, Tuesday, May, 16, 2017. (AP Photo/Fernando Vergara)

Like many of its emerging markets peers, Colombia is fighting strong headwinds.

The collapse of oil prices was a heavy blow. Although it represented only three per cent of GDP, in 2013 it accounted for two-thirds of exports, a sixth of government revenues and about 80 per cent of foreign direct investment. As a result, the Colombian economy has decelerated steadily, slowing to about two per cent year-on-year growth in 2017.

The fiscal deficit exploded to almost four per cent of GDP and the current account deficit topped out at about seven per cent of GDP. On top of that, the collapse in oil prices had a devastating impact on its traditional trading partners, such as Venezuela and Ecuador.

Their economic woes were complicated by years of political mismanagement and social unrest. Indeed, Colombia now faces a humanitarian crisis on its eastern flank, as hundreds of thousands of Venezuelans stream across the border in search of food, medicine and refuge.

Colombia has also been buffeted by a bumpy peace process. Former President Alvaro Uribe has been a constant critic. Although he no longer opposes the concept, he remains very critical of the implementation.

A large part of the population is also sceptical, having been led down the primrose path several times, only to be deceived in the end. Restitution will be difficult. An estimated 38,000 square miles of land were stolen by the leftist groups and paramilitary organisations. Many of these properties were resold several times to unsuspecting buyers, thus complicating the restoration to their rightful owners.

Another complication is that all guerillas will need to go before a magistrate to confess their activities before they are allowed to be reincorporated into civil society. This will take an enormous amount of time.

And, another area of concern is that the amount of arms turned in by the FARC has fallen well short of government estimates.

A 2008 military raid against the FARC encampment of Raul Reyes, the guerrilla movement's second-in-command, led to a treasure trove of information from his laptop computer, including a long inventory of weapons and military acquisitions. Besides personal weapons, no high-value items, including surface-to-air missile, have been turned over. Moreover, the government is just starting its negotiations with the ELN, which could be just as difficult.

In order to keep the economy afloat in the face of the drop in oil prices and the expensive costs of implementing the peace plan, the government introduced an extensive tax reform which raised the VAT, removed many exemptions and put a painful strain on middle-income households. Many people are reporting that their tax load will double next year, as the new measures take hold. Nevertheless, the peace process should mark the start of a new era, as well as a reduced dependence on oil.

Two sectors are poised to take off. The first is tourism. Once only a destination for the adventurous set, the sector is experiencing unprecedented growth as tourists arrive to take advantage of its rich flora and fauna.

Tourist receipts grew 8.6 per cent year-on-year in 2016, reaching US$5.7 billion. They are expected to accelerate in the coming years. New international hotels are sprouting across Bogota, Medellin and Cali. Ecotourism is flowering in the deep reaches of the Amazon and the hills of the coffee-growing region. The country has a wide diversity of indigenous cultures, with an array of 65 Amerindian languages. Agriculture is the other sector that will experience explosive growth.

The vast grasslands, known as the llanos, were once under the control of the FARC and ELN. Sharing the same geographic and meteorological conditions as the fertile lands of Mato Grosso, Brazil, they will soon become booming sectors of agro-industrial activity. The government has several infrastructure projects in place to help connect these regions with the rest of the world.

In most countries, elections are worrisome because they could lead to shifts in economic policy. Colombia will hold presidential and con-gressional elections next year. The field remains split among six factions that represent a wide political spectrum. At this time, no major contender has emerged.

Despite enjoying international rapport, President Santos' domestic approval rating is historically low. Yet, there is no concern that the country will change economic direction. There is a deep consensus on three major economic pillars: floating exchange rate, the fiscal rule and the independence of the central bank.

These pillars have imbued a sense of stability that has allowed the economy to endure severe internal and external shocks. Therefore, as the helm turns into the wind, there is no doubt that Colombia will be able to plough into the waves and remain on course.