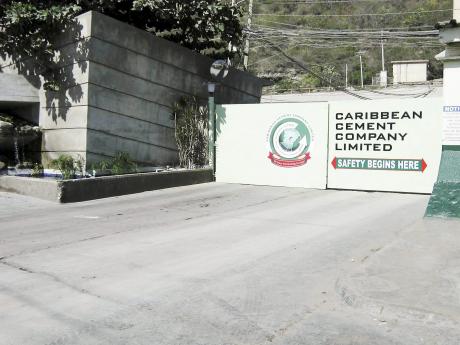 The entrance to Caribbean Cement Company Limited, at Rockfort, Kingston.

Earnings dipped by roughly half to $460.4 million from $834 million a year earlier, impacted by a $357 million charge related to inventory.

The inventory drawdown also carved 36 per cent off operating income in the period.

Caribbean Cement also indicated that it made $814 million of advances to a related company, up from $458 million a year ago, according to its balance sheet. It contributed to a reduction of the cement maker's cash holdings.

"Net cash provided by operating activities was lower than the comparative quarter in 2016 by $146 million, mainly due to advances made to a related company as part of the group's restructuring process," stated management. "This will be recovered in the second quarter of 2017."

Its accumulated losses that had built up over several years of losses, shrunk further from $4.87 billion to $3.94 billion at March 2017.

"The board of directors remains committed to meeting the local cement demand; reinforcing the profitability and competitiveness of plant and to the continuous improvement and promotion of health and safety standards, while creating a better work environment for our people," according to a joint statement signed by Chairman Parris A. Lyew-Ayee and Director JosÈ Luis Seijo Gonzalez.

The Jamaican operation, however, has been managed by Cemex appointees since 2015, the current boss being Peter Donkersloot Ponce, who became general manager in November 2016.

The former boss, Alejandro Vares Leal, was promoted to another job at Cemex Mexico, but he remains on Caribbean Cement's board, to which he was appointed in October 2016.