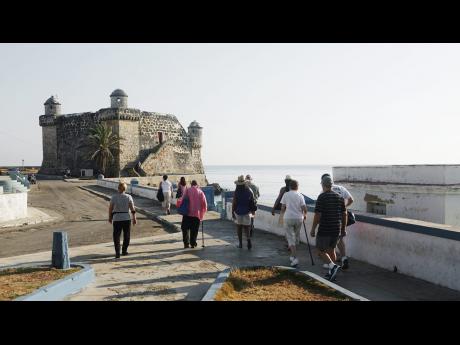 AP
Tourists from the Fathom Adonia cruise ship walk towards the castle in Cojimar, Cuba, east of Havana, Tuesday, May 3, 2016.

When former United States president Barack Obama announced in late 2014 that he was easing travel restrictions on US citizens wishing to visit Cuba, a frisson ran through the tourist industry in the rest of the region.

Seminars and conferences were hastily convened, papers produced, and Caribbean governments sought to understand the extent to which Cuba's opening to the US market might divert visitors.

A little more than two years on, the concerns of the sector seem to have been largely allayed.

The industry variously has taken comfort from capacity constraints in Havana, rapidly rising room rates, and relatively poor service at a time when there has been strong growth in visitor numbers and revenues in much of the rest of the region.

Despite this, it would be wise to consider closely the implications of Cuba and the Dominican Republic's recently revealed tourism-development plans.

What is clear is that both nations are now taking steps to significantly develop their visitor offering in ways that suggest that other Caribbean tourism-reliant economies should prepare for the competition they will face.

In the case of Cuba, those responsible for the industry are well aware of their product's shortcomings and are moving rapidly to improve the country's tourism product.

As a national economic imperative, the Cuban Government is focusing on tourism development and the need to enhance earnings by encouraging visitors to stay for longer, moderating prices, improving service levels, and diversifying the range of accommodation available.

In recent months, official statements have also indicated a new focus on city-centre tourism away from Havana; the creation of completely new resorts; encouraging investment in real estate, in part, alongside the 13 golf courses now under construction; offering external parties management of Cuban-owned hotels and marinas; creating fishing, diving, and equestrian centres; and the construction of theme parks, using the latest technology

As part of its plan to provide better value, the country's state hotel operators are, as a matter of national policy, contracting out the management of whole groups of hotels to mainly Spanish companies such as Melia and Iberostar. In addition, agreements are being signed for international training programmes, for example, with Portugal.

All of this is happening as the country's tourism infrastructure is being upgraded its principal airports, including Havana, undergoing major changes and cruise ship docking facilities expanded to meet the rapidly growing number of cruise ship arrivals.

Although some Cuban industry forecasts made in 2016 - a year in the World Travel and Tourism Council says Cuba earned US$9 billion from tourism - had suggested that growth might be slow in 2017, exactly the opposite has happened, with arrivals increasing from most source markets.

Speaking about this recently, Cuba's Minister of Tourism, Manuel Marrero, said that in the first quarter of 2017, visitor arrivals from multiple source markets grew by 14 per cent compared to the same period in 2016, a trend, he said, that is expected to continue throughout the summer months because of increased airlift.

While any change in US policy on travel to Cuba may temporarily slow arrivals growth, industry analysts suggest that the country is rapidly diversifying its source markets and has the potential to become the second most important tourist destination in Latin America after Mexico, ultimately catering for 10-12 million visitors a year.

Like Cuba, the Dominican Republic is rapidly expanding its tourism market. In 2016, it received 5.95 million visitors, a 6.7 per cent increase on 2015, and generated income of US$6.7 billion. It has set as a goal 10 million visitors per annum by 2023, with a particular focus on increasing its share of the Latin American market, from where it received around 30 per cent of its visitors in 2016. To support its overall plans to grow its industry, the government hopes to see around 18,000 new hotel rooms built by 2019.

As with Cuba, it is also developing new tourism poles, in its case the area of BahÌa de las Aguilas on the country's southwestern coast. It is encouraging some of the world's most important chains to locate in the country, is further developing cruise tourism, and is beginning to promote vacations beyond the beach. It is also developing pre-clearance facilities for US travellers, and as far as is practical, visa-free travel.

All of this is, of course, welcome but suggests that future competition will not just be with destinations far from the region, but from those nations within the region that have understood the need to embrace change, expand, diversify, and improve the visitor experience in ways that offer better value for money.

Some nations, like Jamaica, are actively working on plans to respond, exploring multi-destination travel, and more generally, moving to diversify their product and improve their tourism infrastructure.

Other governments, however, appear unaware of the need to develop plans that respond to the challenge and the opportunity of more visitors arriving in the region.

For years now, there have been discussions in Caricom about improving inter-regional connectivity in ways that genuinely make the Caribbean a joined-up destination that is attractive and better priced for vacationing residents and visitors alike.

Visa-free inter-regional travel, low-cost regional airlift fast ferries, the granting of fifth freedom rights to external carriers, open-skies agreements, and the reduction in travel taxes are all needed if the multiple opportunities to market vacations on a multi-destination or pan-Caribbean basis is ever to be achieved.

The positive news about Cuba and the Dominican Republic's planned tourism development demonstrates the importance of resolving these and other challenges facing Caricom tourism highlighted by both the Caribbean Tourism Organisation and the Caribbean Hotel and Tourism Association.

If such issues are not addressed at the highest levels, not only will this damage and make less competitive a significant part of the region's most important single industry, but it will be yet another nail in the coffin of regionalism.