Greece : Creditors must deliver on promise to lighten debt 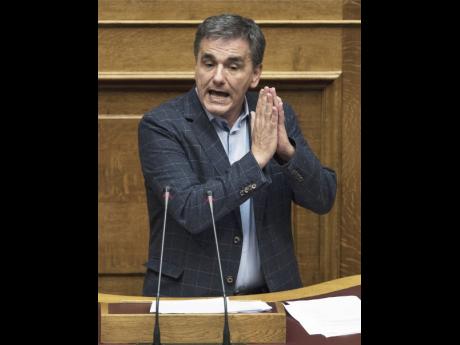 Greece's finance minister insisted Monday the country had met all its reform commitments, and said it was now up to international creditors to agree on how to make Greece's debt sustainable and help the nation emerge from its financial crisis.

Minister Euclid Tsakalotos said Greece had pushed through all the required austerity measures, including pension and public administration reforms, and that it was up to the creditors - other Eurozone countries and the International Monetary Fund (IMF) - to deliver on promises to lighten the country's debt load.

Greece is hoping for a deal during a June 15 Eurozone finance ministers' meeting in Luxembourg.

The main issue has been a disagreement between the Eurozone and the IMF, which is not financially involved in Greece's current three-year bailout programme, regarding Greece's debt.
"There is very little point in entering a (bailout) programme if the goal is not to leave the programme. And leaving the programme should be the responsibility not just of the debtor country, but the creditor country as well," Tsakalotos told journalists in Athens. "We've done our share of the deal, it's up to our creditors and the IMF to do theirs."

Germany and the Netherlands have indicated they will refuse to lend more money to Greece without the IMF's participation, while the IMF says Greece's debt must be sustainable in order for it to participate.
Athens says resolving the debt issue is crucial to its ability to attract investors and emerge from the financial crisis it has been struggling through since late 2009.

The IMF argues that the eurozone forecasts underpinning the Greek bailout are too optimistic and that the country needs debt restructuring so it can start growing on a sustainable basis. Greece has wallowed through an economic depression that's seen its economy shrink by a quarter and unemployment and poverty spiral.

The Eurozone has ruled out any debt write-off for Greece, but has indicated that extending Greece's repayment periods or reducing the interest rates on its loans are possible at the conclusion of the bailout next year.

Athens argues that the delays are now due entirely to disagreements between the IMF and the European creditors.

The finance minister said there were "no excuses for not getting this overall deal that the Greek economy so desperately needs in its efforts to access the markets and therefore to be able to leave the programme as planned in the summer of 2018".
- AP