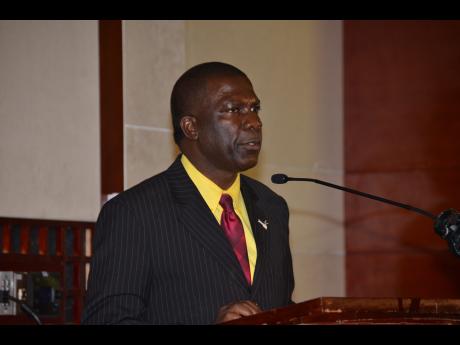 "The flood, plus the impact of leaf rust, could cost the sector more this year. The leaf rust has been made worse by the damp weather," he said on Thursday.

In light of the problem, he said the Jamaica Coffee Exporters' Association is asking for an intervention, costed at approximately $130 million, in order to bring the disease under control.

Coffee leaf rust disease, which manifests in yellowish, oily spots on the underside of the leaves of coffee trees, was first observed in Jamaica in 1986.

The traditional approach to controlling it involves chemical application. The disease, which has been spreading in recent times, usually increases in severity with flooding and heavy rains.

Grant believes there could be more fallout from the coffee crop if action is not taken to contain it.

"We are down 25 per cent now and if the problem continues, we will see further decline," the senator said. He asserted that coffee was a critical industry and so the intervention should be prioritised.

The JAS president said coffee processors are expected to pay out $1.9 billion to $2 billion to farmers this year for cherry coffee.

He said that in addition to disease mitigation, farmers were also in need of assistance for flood recovery, including materials for replanting. In the second quarter, he said, rains resulted in an estimated loss of $100 million in coffee beans.

"The beans were ripe and ready to be picked," he said, adding that the rains were responsible for seven to 10 per cent of total crop losses.

The impact of the weather, combined with the impact of leaf rust disease, will result in a fall in total production of 25 per cent, he projected.

"What is going to be critical is that we provide assistance to farmers," said Grant, adding that farm roads and other support infrastructure damaged by flooding should be fixed.