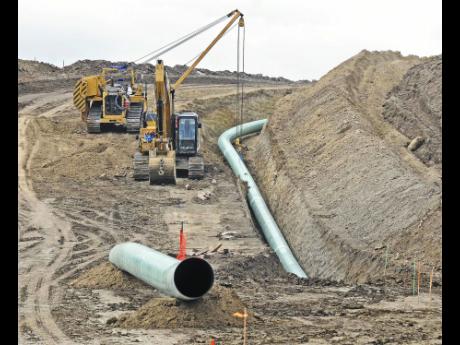 AP
In this October 5, 2016, file photo, heavy equipment is seen at a site where sections of the Dakota Access Pipeline were being buried near the town of St Anthony in Morton County, North Dakota. The line was put into service on Thursday, June 1.

Dallas-based Energy Transfer Partners (ETP) announced that the 1,200-mile line carrying North Dakota oil through South Dakota and Iowa to a distribution point in Illinois had begun commercial service. Dakota Access and the Energy Transfer Crude Oil Pipeline from Illinois to the Gulf Coast together make up the US$4.8-billion Bakken Pipeline system, which ETP said has commitments for about 520,000 barrels of oil daily.

"The pipeline will transport light, sweet crude oil from North Dakota to major refining markets in a more direct, cost-effective, safer and more environmentally responsible manner than other modes of transportation, including rail or truck," the company said in a statement.

Four Sioux tribes in the Dakotas are still fighting in federal court in Washington, DC, hoping to persuade a judge to shut down the line. Tribes and environmental groups fear it might pollute water sources. More than half a year of protests in North Dakota resulted in 761 arrests before President Donald Trump's administration and the courts allowed the pipeline to be completed earlier this year.

"Now that the Dakota Access Pipeline is fully operational, we find it more urgent than

ever that the courts and administration address the risks posed to the drinking water of millions of American citizens," Standing Rock Sioux Chairman Dave Archambault said in a statement. "This pipeline became operational today, yet it has already leaked at least three times."