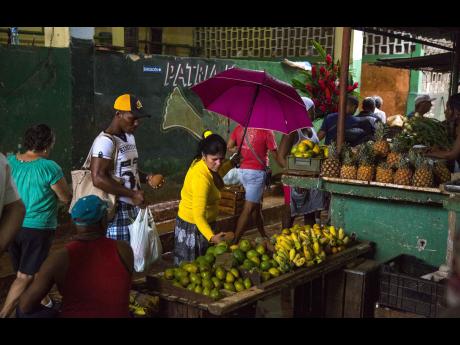 AP
In this December 4, 2015 file photo, people shop at the El Egido food market in Havana, Cuba. Private business people are officially recognised only as 'self-employed', a status with few legal protections and no access to wholesale goods or the ability to import and export.

A handful of entrepreneurs have quietly formed Cuba's first private small business association, testing the government's willingness to allow Cubans to organise outside the strict bounds of state control.

More than a half-million Cubans officially work in the private sector, with tens, perhaps hundreds of thousands more working off the books. Cuba's legal system and centrally planned state economy have changed little since the Cold War, however, and private business people are officially recognised only as self-employed, a status with few legal protections and no access to wholesale goods or the ability to import and export.

The government is expected to take an incremental step towards changing that Thursday when Cuba's National Assembly approves a series of documents updating the country's economic reform plan and laying out long-term goals through to 2030. Those goals include the first official recognition of private enterprise and small- and medium-size businesses, although it could be years before any actual changes are felt on the ground in the country.

The Havana-based Association of Businessmen is trying to move ahead faster, organising dozens of entrepreneurs into a group that will provide help, advice, training and representation to members of the private sector.

The group applied in February for government recognition. While the official deadline for a response has passed, the group has yet to receive either an okay or negative attention from authorities, leaving it in the peculiar status known in Cuba as 'a legal' or a-legal, operating unmolested but vulnerable to a crackdown at any time.

"People have approached with a lot of interest, but they don't want to join until we're officially approved," said Edilio Hernandez, one of the association's founders. Trained as a lawyer, Hernandez also works as a self-employed taxi driver.

"Many people really understand that entrepreneurs need a guiding light, someone who helps them," he said.

Another founder, Rodolfo Marino, has a construction licence and has worked

privately and under contract to state agencies. He said organisers of the association have gone door to door trying to recruit members by convincing them they need independent representation.

The group says roughly 90 entrepreneurs have signed up. Without legal recognition, the group is not yet charging membership fees, the organisers say. Until then, they meet occasionally in Marino's Havana home to plan their path forward, which includes legal appeals for government recognition.

"We hope to push the country's economic development forward," he said.

The number of officially self-employed Cubans has grown by a factor of five, to 535,000 in a country of 11 million, since President Ra?l Castro launched limited market-based reforms in 2010. The government currently allows 200 types of private work, from language teacher to furniture maker. In reality, many officially self-employed people have become owners of small business, some with dozens of employees and hundreds of thousands of dollars in annual revenue - big number for a country where the monthly state salary is about US$25.

Without access to government-controlled imports, exports or wholesale supplies, business owners are emptying the shelves of state stores, either by snapping up items as soon as they arrive or buying them stolen on the black market. That leaves them vulnerable to crackdowns and frequent extortion from state inspectors.

The government has taken a few tentative moves towards easing the situation in recent months - opening stores where owners of some of the country's 21,000 bed-and-breakfasts and 2,000 private restaurants can buy large quantities of goods, although still at retail prices.

The state has also promised special access to gas and car parts to taxi drivers who comply with widely flouted government caps on fares.

Along with those small steps, the future of the Association of Businessmen is a gauge of Cuba's openness to private enterprise and its ability to move forward, the group's founders say.

"We really hope they approve us," said Hernandez, the lawyer and taxi driver. "If they don't, we'll be in the hands of a state that considers us illegal and we won't be able to reach our goal of representing entrepreneurs. If they do, it will be a sign that things are changing."