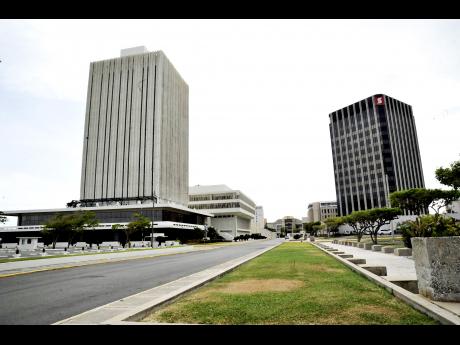 Norman Grindley
The Bank of Jamaica is seen at left, while Scotiabank Jamaica is to the right. The central bank regulates both banks and the remittance market.

A recent survey conducted by the World Bank has identified the Caribbean as the region most severely affected by the withdrawal of correspondent banking relationships, CBR, and found that smaller countries are particularly vulnerable.

It said a study by International Monetary Fund (IMF) staff of stakeholders in the Caribbean also provides evidence of a significant impact throughout the region on the money- or value-transfer services, which is important for international remittances.

This includes money-transfer services in Jamaica - cambios - where a leading bank no longer accepts foreign instruments and remittances from some money services businesses, according to the IMF in its May 2017 Western Hemisphere regional economic outlook.

"Limitations on this sector could have a detrimental impact on financial inclusion. For example, in Jamaica, cambios play a critical role in the market for foreign exchange by fostering increased competition, convenience, and wide access demanded by a tourism-driven economy," it said.

In March this year, the Ministry of Finance and the Public Service launched a National Financial Inclusion Strategy, the Government's commitment to creating the enabling environment which makes it easier for Jamaicans to save, invest, do business and obtain relevant financial products and information.

However, the withdrawal of CBRs does not yet appear to have the anticipated negative impact on remittances to Jamaica.

In the report of the survey of consumer confidence for the first quarter of 2017, released in Kingston on Tuesday, researchers found that Jamaican recipients of remittances remained unchanged at 38 per cent.

They also found that the percentage of persons who receive remittances on a monthly basis rose to 35 per cent from 28 per cent in 2016, were slightly less common among the youngest recipients and more common among the eldest.

The IMF regional outlook also noted that the cost of sending remittances to Latin America and the Caribbean is lower than to other regions with the exception of South Asia, but said that at 6.2 per cent of the value of a US$200 transaction, it remains substantial.

It pointed out that the costs have declined significantly over the past decades, for example, by 15 per cent to Jamaica between 2001 and 2015.

The IMF regional outlook noted that global banks have selectively withdrawn from CBRs over the past few years, reflecting banks' evolving cost-benefit assessments, including changes in the regulatory and enforcement landscape in advanced economies.

Several banks across the region, including Jamaica, have lost some or all of their CBRs.

In the most affected countries, the IMF said, the loss of CBRs has led to a rise in the costs of processing international transactions because of higher costs associated with more robust due diligence efforts and, in some cases, higher service fees. The time taken to process transactions has also increased.

The IMF has recommended that "coordinated efforts by the public and the private sector are called for to mitigate the risk of financial exclusion".

It noted that several initiatives are under way to better understand the withdrawal of CBRs and assess and mitigate the potential impact, with efforts led by the IMF, the World Bank, and the Financial Stability Board.

Caribbean regional bodies have stepped up efforts to raise awareness of the impact on the region of the withdrawal of CBRs. "Among possible solutions, strengthening of respondent banks' capacity to manage risks is an immediate priority," the IMF said.

The consolidation of transactional traffic through downstreaming - whereby the correspondent bank has a relationship with an intermediary bank, which has relationships with other respondent banks - has already gained traction in the region.

The consolidation of small-sized respondent banks also has the potential to bolster the level of transaction flows with correspondent banks, as well as to provide economies of scale for due diligence processes, the IMF said.