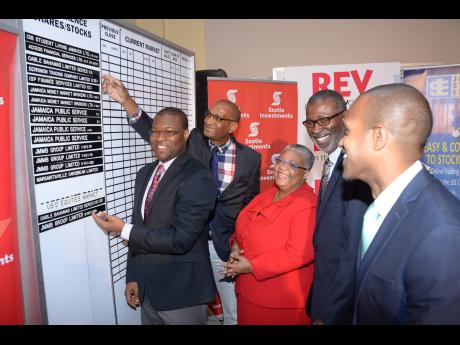 A cable company based in the Bahamas has tapped Jamaica for financing through two issues of preference shares that will trade on the Jamaica Stock Exchange (JSE).

One of the preference stocks listed Friday has set a new record for price on the Kingston exchange $1 million per share.

Cable Bahamas Limited, a publicly listed company in its home market, is raising capital to position itself for more aggressive competition against rival Bahamas Telecommunications Company, the Liberty-owned sister operation to Flow.

Cable Bahamas started diversifying into mobile phone services last November to grow its operations having tapped Scotia Investments Jamaica Limited to help raise funds for the project. Jamaican investors bought up $1.9 billion of preference shares from the telecom and on Friday both securities were listed on the JSE, fulfilling a commitment to the subscribers of the offer.

JSE Managing Director Marlene Street Forrest used the opportunity to lobby the cable company, and others, to cross-list their ordinary stock in Jamaica.

Incidentally, Margaritaville Caribbean announced Friday that it would be delisting its prefs from the JSE, hours after Cable Bahamas prefs were added to the listing board.

"I wish to encourage Cable Bahamas and any other and other companies listed on the exchange to continue to provide value for shareholders because I would imagine that this will not be your first or second listing you will be coming back," Street Forrest said. "You will be having a presence in Jamaica and we know that we will always be working with you."

Scotia Investments was approached by Cable Bahamas to arrange a private placement of fixed rate redeemable cumulative preference share with institutional investors. Funds raised through this offer totalled $1.9 billion, broken down into two preference share issues valued at US$4.09 million and $1.35 billion, which will trade respectively on the JSE's USD Market and Main market.

Scotia Investments CEO Lissant Mitchell said the Canadian-owned financial group had a prior relationship with Cable Bahamas, explaining how his company came to structure the financing deal.

"Scotiabank has a relationship with them and it is part of the deeper relationship that we have across the Caribbean, despite being physically based in Jamaica," said Mitchell.

"Our relationships with our Caribbean counterparts are very strong and we use that in most instances as an avenue to ensure that clients across the region that we serve get the best opportunity in achieving their objectives," he said.

As to why Jamaica was chosen over other regional markets for the placement, Mitchell said: "The reality is that the capital market in Jamaica is probably the deepest in the region".

Chief Operating Officer John Gomez said the funds raised would back the company's push for a piece of The Bahamas' US$300 million mobile telephony market, a move he said was a critical part of the company's growth strategy.

"Growth is expected to come from the expansion in mobile. Since November of last year in terms of moving into that space we've acquired just under 30 per cent of that market," Gomez said, noting the company had invested heavily in the necessary infrastructure, equipment and personnel.

Cable Bahamas' subsidiaries include Cable Freeport Limited, Caribbean Crossings Limited, Maxil Communications Limited, Systems Resource Group Limited and Be Aliv Limited, all of which are incorporated in the Bahamas; and Summit Vista Inc, which is incorporated in Florida.

The company is listed on the Bahamas International Securities Exchange. Gomez said Cable Bahamas went public in 2002 and strengthened further through acquisition.

"We've built a network and a suite of services that is entirely Bahamian. We do bring in some expertise for some specialities that we have, but the entire thing from management to technical team is all Bahamian - and that is something we like to brag about," he said.