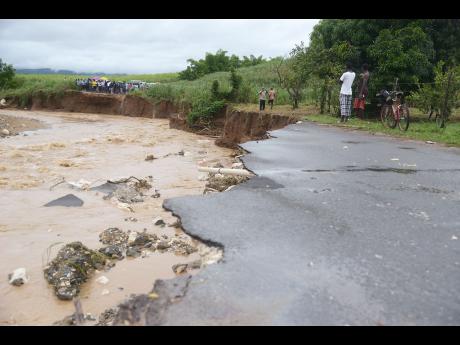 Ian Allen
Residents view a breakaway along the Sunnyside-Guys Hill main road during flood rains on May 16, 2017. 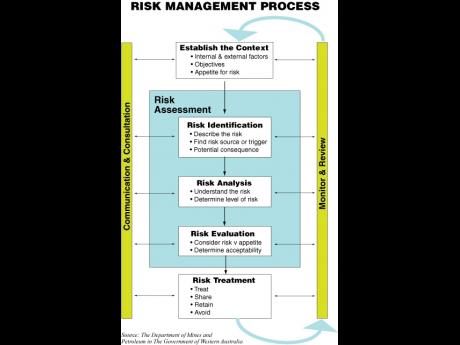 Nearly 500 million persons around the world were affected by disasters linked to natural hazards in 2016. These included floods, storms, earthquakes and drought and 8,000 persons lost their lives as a result.

The direct economic costs of major disaster events, according to the May 27, 2017 issue of the Financial Tribune, were estimated at US$138.8 billion.

The World Bank, the same article said, "estimates that the real cost to the global economy from disasters is US$520 billion per year and that they push 24 million people into poverty annually".

Preliminary estimates suggest that losses to agricultural crops, livestock, and infrastructure from four events of flooding and excessive rainfall between March and May this year in Jamaica amounted to

The size of the impacts surprised many persons. They occurred before the start of the 2017 Atlantic Hurricane Season. Local economic analysts are even suggesting that GDP growth forecasted for the current financial year is unlikely to take place because of these occurrences.

The local events are part of a global trend. Many persons appear to have overlooked this based on their post-event comments.

More investment in infrastructure like drains and concrete roadways will prevent the problems. In my October 26, 2016 column on lessons from Hurricane Matthew, I wrote that policymakers should recognise the fact that Jamaica is prone to several types of natural disasters and start doing things to minimise the effects of future occurrences that can lead to loss of lives and cause disruption in our fragile economy.

A review of the narrative associated with minister of finance's 2017-18 Budget presentations does not provide any evidence that considerations relating to the country's risk profile were taken into account in the construction of the Government's economic plan. The phrase 'risk management' does not appear in the official transcripts of the speeches.

In a piece that I wrote for the Financial Gleaner on March 24, 'The real culprits in the Coffee Board debacle', I argued that managing risks is one of the essential tasks of boards in public- and private-sector companies - especially in a place like Jamaica - and that the loss of an estimated US$3 million in inventories was symptomatic of the failure of that institution's board to properly carry out its risk-management functions. In our system of government, members of The Cabinet are the counterparts of private- and public-sector boards.

What is risk management? The Department of Mines and Petroleum in The Government of Western Australia provides a framework for understanding the process (see chart). The agency says: "Risk management is recognised as an integral component of good management and governance. It is an iterative process consisting of steps, which, when undertaken in sequence, enable continual improvement in decision making. Risk management is the term applied to a logical and systematic method of establishing the context, identifying, analysing, evaluating, treating, monitoring, and communicating risks associated with any activity, function, or process in a way that will enable organisations to minimise losses and maximise opportunities. It is as much about identifying opportunities as avoiding or mitigating losses."

My despair about the about quality of the public discussion about the latest flood event has subsided. Why? Because I learnt that on May 27, the Caribbean Development Bank and CCRIF SPC, formerly the Caribbean Catastrophe Risk Insurance Facility, launched what was called an Integrated Sovereign Risk Management Project in The Caribbean. Jamaica contributes to the CCRIF.

"This project seeks to enable all Caribbean countries to take a more proactive approach towards country risk management, moving beyond planning for natural disaster risks such as climate change and events like hurricanes and earthquakes and recognising the intrinsic linkages between disaster risk and other types of risks such as economic, technological, and financial and the impacts of these on socio-economic development."

According to www.caribbeanewsnow.com: "CDB president, Dr William Warren Smith, indicated that this project will help Caribbean governments address their increased vulnerabilities caused by socio-economic factors as well as the technological and economic interconnectedness of communities across regions and throughout the world.

Smith noted that CDB has strengthened its risk-management infrastructure over the past few years by adopting an integrated enterprise risk-management framework. The bank will use this experience to support a holistic approach to risk management in Caribbean states. The proposed benefits will include maintaining country ratings; sharing risk intelligence and mitigation strategies across the region; and encouraging the adoption of a proactive forward looking risk approach to country management in a way that would improve economic performance.

CCRIF CEO, Isaac Anthony, stated that the project also "is intended to enable the countries in the region to become more resilient, by enhancing the capacity of governments to take a portfolio view on risks and include all risk categories - technical, economic, natural and social risks - and their interdependence in a geographic context". He further indicated that a key part of this new integrated risk-management framework would be to establish country risk officers or coordinators within countries, that is senior-level positions that will be responsible for managing the overall risk landscape, taking a holistic approach to risks before events occur and ensuring that countries adopt a more proactive, precautionary approach to anticipating future challenges."

To this I say, amen and amen.