Cedric Stephens | Important insurance lessons from the Cash Plus fiasco 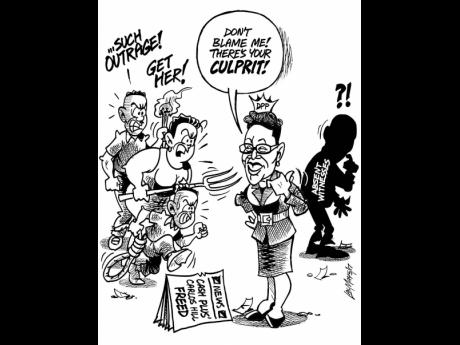 QUESTION: My car is insured comprehensively through a broker. It was recently involved in an accident and was written off. The third-party insurers have accepted liability by word-of-mouth. In the meantime, my insurers have offered to settle my claim based on a 2014 valuation. The proposed net settlement is $524,000. Pre-accident value less $36,000 deductible, minus salvage value of $160,000. Coverage on my car was provided under a policy for company employees. I do not have a copy of the contract. The summary of the policy that I have does not speak to situations like mine where salvage is involved. Can the insurer force me to the salvage? Do I have any options?

INSURANCE HELPLINE: Are there any lessons to be learned from the Cash Plus fiasco in which 40,000 persons lost an estimated $19 billion in an investment scheme that the creators walked away from scot-free when the matter finally came up for trial in court? Yes. Plenty.

Can the experiences of the many victims that separated 'investors' from their money - in many cases, life savings - be applied to other transactions like buying insurance generally, and motor vehicle insurance in particular? Is there any relevance between these matters and the two questions you raised?

The starting point for understanding the lessons is an extract from a statement from Office of the Director of Public Prosecution. DPP Paula V. Llewelyn QC wrote: "the modus operandi of ... Cash Plus made prosecution difficult". The mechanisms for collecting monies from investors were loan agreements.

"Under the carefully worded loan agreements which the depositors signed," said the DPP, they "made loans to Cash Plus, which would be repaid with interest. Based on the rates of interest offered, depositors/lenders would actually or could, potentially, have been in breach of the Moneylending Act".

Simply put, the way in which the agreements were written and agreed to by the investors 'actually or could potentially' breach the Moneylending Act. The beneficiaries of the scheme, however, were blameless!

Lawrie Savage, a former head of the insurance regulatory body in Ontario, Canada, provides in his 1998 paper, Re-Engineering Insurance Supervision, the context for this response.

In making the case for supervision of the insurance industry, he writes: "Because premiums are paid now, in return for a benefit which may not occur until many years in the future, the purchaser of insurance is entirely reliant on the expectation that the insurer will still be in business at that unspecified future date and that it will then have sufficient financial resources to discharge its obligation. In this changing and uncertain world, it is not a foregone conclusion that this will always be the case, particularly having in mind the difficult and volatile economic circumstances that are frequently characteristic of developing countries. Nor can one rule out the possibility that negligence or unscrupulous behaviour (on the part of management), rather than difficult economic circumstances, will be the cause of the company's inability to pay".

These are some of the reasons this column has never been shy about criticising the work of our regulator, the Financial Services Commission, which was also an important state actor in the failed case against Cash Plus.

Insurance buyers should take steps to protect themselves or do their homework before making decisions - much in the same way that investors in Cash Plus and Olint should have done. Regulation and homework are two of the recurring themes discussed during this column's 20-year history.

Your disclosure that you do not have access to the actual contract of insurance is very disturbing. The broker should have anticipated that you and other employees would, at some time in the future, want to examine the contract. Providing access to it on their website should be no big thing. Instead, they gave you a piece of paper which is absolutely of no use in making a claim and is of no legal value.

Insurance brokers should know, to quote Savage, that "contractual complexities tend to put the insurer in a position of strength when it comes time to settling a claim."

The Cash Plus loan agreement and the rate of interest were 'contractual complexities'.

Also, "the insurer has the legal and financial resources to dispute a claim, even if on a technicality, has possession of the funds and the policyholder is dependent on the insurer to gain access to them. By unfairly resisting claims an irresponsible insurer is therefore in a position to retain funds rightly due to policyholders, and it can be difficult for policyholders to protect themselves against such abuses".

The exchange of emails between you and your broker's claims associate led me to conclude that none of the things that Savage wrote about entered that person's mind in the handling of your claim.

Additionally, the associate appears not to have recognised that he/she was simply acting as an empty vessel who contributed absolutely nothing to the claims process and that the failure to add value was at variance with their legal and professional duties to you, the client.

I am very puzzled by the fact that the settlement of your claim was offered on the basis of a three-year-old valuation. Motor vehicle claims, from my experience, are generally settled on the basis of the market value immediately prior to the accident. Did the latter equate with the estimate on the 2014 valuation? Your broker provides no answer to this question. Should their silence on the subject be interpreted as an implicit recommendation that you should accept your insurer's offer of settlement and retain possession of the salvage?

Your claim was improperly handled. It is highly unlikely that the claim associate would have developed the knowledge and expertise to substantially improve the quality of their performance over a short period of time.

Go much higher up the food chain in the company to ensure that your claim gets the proper attention it deserves and that you do not end up losing money for an accident for which you were not at fault.