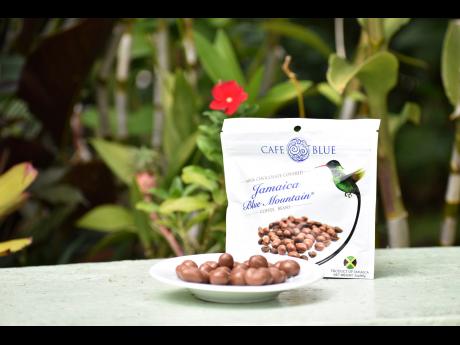 Coffee Traders Limited, one of the big three coffee companies, has added a chocolate-coated delicacy which it will retail through its own chain of coffee shops, as well supermarkets and hotels.

Coffee Traders is not the first to marry chocolate with coffee in Jamaica, but its venture appears to be only one to take a mainstream, national approach to distribution.

"Cocoa has a rich tradition in Jamaica offering high-quality products. Why are we in Jamaica supporting imports for the enrichment of companies that are not from Jamaica. We should support our own," said Coffee Traders director Jason Sharp.

Jamaica, in 2015, was spending US$9.4 million ($1.2 billion) on imports of "chocolate and other food preparations containing cocoa". That's the market Sharp is going after. The data for 2016 estimates imports at US$5 million, according to the United Nations INTRACEN trade database, but the period is unspecified.

Sharp indicated that most of the chocolate retailed in Jamaica originates in Ghana or the Ivory Coast, with traders on-selling to producers in the United States, Europe or Trinidad. It's then mixed into chocolate and imported to Jamaica.

Coffee Traders is known for its luxury brands of Jamaica Blue Mountain coffee (JBM) and CafÈ Blue network of coffee houses. Its coffee is also sold through a network of supermarkets, hotels and pharmacies, providing the company with the platform for its chocolate-coffee beans.

The product was initially placed in CafÈ Blue shops earlier this year to test market the reception. It retails for $650 for a 3oz bag. Over the next two months, Sharp said he will expand the distribution channels.

"We are in discussions with two distributors now," he said.

Chocolate-covered coffee beans are popular in coffee-growing countries, including Colombia. Locally, it's been done by entities such as Silver Hill Select and CafÈ Carib from Japan Caribbean Trading Company Limited. A number of overseas brands also make the chocolate-covered beans using JBM and other coffees.

Over the medium term, Coffee Traders plans to expand its cocoa operations to make chocolate bars, but Sharp declined to say more about how that project would be rolled out.

"We want to make chocolate that is purely Jamaican and world-class," he said, adding that the cocoa would be sourced from established local farmers. He will have to compete with foreign buyers of the product that is considered to be among the best quality in the world.

There is a lot of discussions to revive the cocoa industry with the Government aiming to divest the bulk of its cocoa assets. Michael Lee-Chin's Wallenford Limited has been tapped as the buyer, but the finalisation of that transaction has dragged on since 2014. The head of Wallenford, Mark McIntosh, refused to comment on the status of the deal this week.

At the same time, some medium-sized farmers are replanting and chocolatiers are quietly retooling. Artisan roasters such as One One Cacao are jetting to the United States and Europe to establish direct markets with retailers.

"Jason does nothing in halves. It is going to take like-minded persons to make this industry a viable success," said Nick Davis, founder of One One Cacao, when asked of Coffee Traders' import substitution model.

Davis wants more producers to export finished products. His company was included as a recent cohort of the Branson Centre of Entrepreneurship.

"Ultimately, most of the producers of the best cocoa in the world have the access to the best markets. But when you export raw material you lose all of that added value; you lose all those linkages that provide value for your economy," he said. "We need to stop sitting on our laurels."

In the 1960s, cocoa export earnings were multiples of that earned from coffee. The coffee industry, however, found its niche market in Japan, which paid a premium price. Jamaica's cocoa remained at commodity prices and felt increased competition from larger African producers.