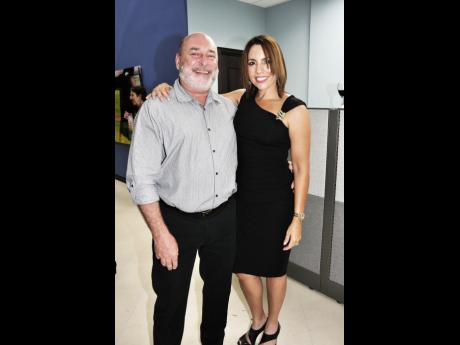 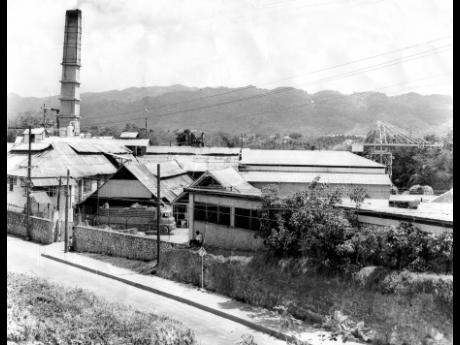 Gleaner photograph
This 1964 Gleaner file photo captures the Front view of the Barnett Estates and factory, with the Bogue hills in the background.
1
2

The Kerrs and the Jarretts sailed from England in 1655 with Admiral Penn, General Venables and Captain Henry Morgan to execute Sir Oliver Cromwell's so-called 'western design' to wrest the island from the Spanish.

It has been said that sugar planter and long-standing custos of St James, Sir Francis Montcrieffe Kerr-Jarrett, believed it was divined for the Barnett lands his family inherited - at one time encompassing nearly all of Montego Bay stretching to Falmouth in its heyday - to be used to design a proud and planned western city.

Working through the Barnett Group and its subsidiaries - Barnett Construction Services, involved in heavy equipment rental and project management; Barnett Tech Park Limited, a registered special economic zone; Montego Westgate Property Development; and Barnett Plantation Tours, operator of the Bellefield Great House - the Kerr-Jarretts have changed the face of the Barnett family business in Montego Bay that had its origin in the era of sugar, slavery, and colonialism.

They are now ushering in new property developments, including housing, modern shopping, and a tech park for business process outsourcing, or BPO, firms.

Having, by their account, spent billions of dollars on these new developments so far, the Kerr-Jarretts still have their eyes set on other vistas. These include the long-awaited western campus of the University of the West Indies, a multimillion-dollar commercial zone at Bogue, more middle-income houses in the already sold-out Montego Bay West development at Fairfield being done by Gore Developments Limited, as well as additional BPO space.

The 12.24-hectare (30-acre) Springs development at Bogue will involve the creation, over three to five years, of some 30 commercial lots to be leased and is now in the process of receiving approvals. The Kerr-Jarretts plan to shell out about $3 billion to develop the project, with $320 million of that being for infrastructure.

A "fair amount of interest" is said to be already coming from several Kingston-based companies seeking to set up regional operations in the western city.

The managing director, mechanical engineer Mark Kerr-Jarrett, says even after all this, there will still be more developable portions of his Barnett cane lands. A riverside reserve comprising "290 acres on either side of the Montego River" has been set aside for what he calls the Southbank Commercial Centre, planned to accommodate more BPO space, a financial services district and attractions for cruise ship tourists complete with a jogging trail.

"We are awaiting critical mass before we go into that," he says.

With the upscale Westgate Hills serviced lots completed since 2013, the Kerr-Jarretts hope sometime in the future to construct apartments on another eight acres in that area, as well as more high-end housing on its 1,200-acre mountain forest overlooking Montego Bay and stretching all the way to Roehampton in the parish.

It is the commitment to holistic development following the two-decade-old Montego Bay South development plan for their properties which the Kerr-Jarretts say has been largely responsible for the build-out not being more rapid.

"Had we not had the Montego Bay South master plan, it would have been ad hoc. Some people think we are holding the land, being selfish about it, but you have to release it in a timely basis; if not, you are going to have a hodgepodge development with no real future growth potential and it's not organised or sustainable," they said.

"So the master planning was very important. Holding land is an extremely expensive business. If we just chop it up and sell, we would be a lot better off (financially). But we are adhering to the master plan. It's like diamond mining, you release as it's needed and as the demand comes, so you can adhere to the format and ensure that the end product will be an organised, well-defined, well-serviced, sustainable city that everybody can be proud of and where the quality of life will be ensured to the highest level."

The high cost of capital is said also to be stymieing the rate of build-out of the 45-acre Barnett Tech Park, still only 25 per cent complete after investments of $2.5 billion and where several BPO companies have set up shop.

"It's very expensive. We can't afford the interest rates. We are working with the Development Bank of Jamaica (DBJ) and the PetroCaribe Fund in getting better interest rates and terms. They are very cooperative," Mark said.

He explained that loan funding was provided directly by DBJ at 4.5 per cent and 4.75 per cent to construct two buildings. Funding to put up another two buildings, still to be completed, came in at six per cent via NCB Capital Markets after the DBJ stopped distributing PetroCaribe Funds directly to individual borrowers.

"Six per cent is a challenge. It's hard on us to be increasing our investment and the interest rate is going up," said the Barnett Group head.

His wife is more vocal about the Government's policy of building BPO space.

"Government should not be building competing space. They should take the money and lend it to the private sector. The private sector takes the risk and they know how to make things work," said Paula Kerr-Jarrett.

They both think the jury is still out on the benefit or disadvantage of the new special economic zone legislation.

"We don't know yet," they respond in unison, although they note that under the law, land vested in the Jamaica SEZ Authority is exempted from paying land tax, while others have to pay.

Despite the hiccups, work on the Barnett Tech Park is pressing ahead with a 50,000-square-foot facility to be turned over to a new tenant this month and another 50,000 square feet to be completed in October. This will bring the development to 300,000 square feet of BPO space at 30 per cent completion.

"We have lost several potential tenants in the last few months because we don't have space available immediately," says Paula, who has been driving the Barnett property development. She points out that each 50,000 square feet translates to 1,000 jobs.

Projects in the pipeline

Another snag in the build-out of the Kerr-Jarretts' western development plan concerns the delay in the construction of the new western Jamaica campus of the University of the West Indies to train some 10,000 students, many for the BPO firms at the tech park next door. The UWI did not provide reasons for the delay to its plan, announced in 2014, for a US$170-million investment in the campus with a plan for financing and construction by Chinese firm Complant.

"The land is being acquired and is in the process of being paid for. We gave them a 65 per cent discount on the land," said Mark, who stopped short of disclosing the sale price.

"We are a little disappointed with the time it has taken them to pull it together. It's becoming an issue for us. We are committed to it with our (BPO) tenants," Paula added.

The housing elements of the UWI development fits snugly into the Kerr-Jarretts' master plan, which also includes lands sold for housing to financial services firm Sagicor.

The leading land family in Montego Bay rue what has become of the Bogue Village development, saying that despite their best efforts and the hard work of Gore Development, homeowners have failed to pay maintenance fees to finance communal amenities such as security, landscaping, parks and sporting facilities. In addition, there is said to be rampant breaches of building covenants through unauthorised extensions.

"Bogue Village has not turned out as planned with the resulting depression of property value there. Extensions to units, in breach of the covenants, have put stress on water and sewage," Mark said.

The master plan for lands owned by Barnett Limited was done in 1994, prompted by the Government's compulsory acquisition of significant acreage of the Barnett cane lands to build sewage ponds.

It was modified in 2000 after former Prime Minister P.J. Patterson requested that the document be taken off the shelf with a view to activation. This coincided with the start of construction of the Fairview shopping centre in 1999 by the Fredrik Moe and Eddie Azan-led Cascade Group on lands bought from the Kerr-Jarretts.

That development is reported to be valued at some US$30 million, and subsequent phases of the ongoing build-out have been based on a joint venture between Cascade and Barnett Limited.

The property is now almost entirely out of agriculture, the diversification being driven by the legal acumen and deal-making skills of the one-time politician Paula, while the heavy equipment rental and day-to-day management is the preoccupation of managing director Mark, who is still nostalgic about the agricultural raison d'Ítre of the family business.

There is still a small acreage - some 200 acres compared to close to 2,000 in the heyday - under sugar cane and other crops approved by the Kerr-Jarretts, as well as the herding of sheep and goats.

The agricultural operation has been have leased out. The Kerr-Jarretts acknowledge that losses to illicit cane fires and theft of bananas, mangoes, coconuts, papayas and winter vegetables have forced their departure from the sector.

By Mark's reckoning, the property comprised around 3,700 acres back in 1988, inclusive of 1,500 acres of agricultural lands. But there have been various deals since then in which some of the property have been sold.

As to whether his children will carry on and continue to execute the 'western design', Mark says that is something to be determined in the future.

"It is too early to say," he said. "We like to leave them the opportunity to choose their own path."

UPDATE: This article has been updated to correct the name of the custos from Sir Peter Francis to Sir Francis Montcrieffe Kerr-Jarrett and grandson Mark Kerr-Jarrett's relationship to him.