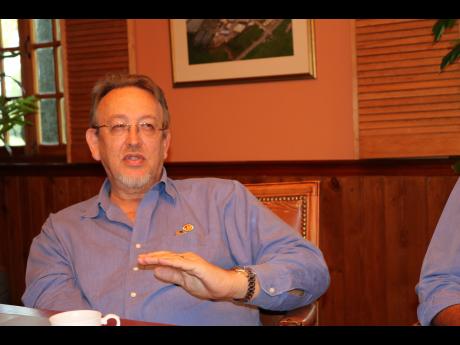 Jamaica Broilers Group (JBG) is introducing a new bird to the market, called the Barred Rock, which the poultry producer says is likely to lead to a cut in the price of table eggs.

The bird is targeted for what Jamaica Broilers describes as the 'backyard' segment of the layer market.

The company says 174 million eggs are produced annually in Jamaica valued at around $4 billion. The average retail price for eggs is $300 per dozen.

Small egg farmers supply 15 per cent of the market and JBG believes they can produce more of the protein at a cheaper price.

The backyard hens are produced by Wincorp International, another division of the Jamaica Broilers Group, and distributed through Hi-Pro.

The chicken looks like what is commonly called a Dominic fowl and "is excellent at producing eggs," said Conley Salmon, president of the Jamaica Operations of Jamaica Broilers.

The chicken starts laying at 18 weeks, is suited to backyard conditions. and should have a laying life of 18 months, Salmon told Gleaner Business. It lays fewer eggs than the commercial bird but requires less care, he added.

Production costs, he said, come in at around $130 per dozen eggs.

Jamaica Broilers began touting the new bird at the recent launch of the Denbigh Agricultural Show, saying that backyard and small farmers who currently have a good track record of producing about one million kilos of broiler meat a week are "quite capable of producing high-quality eggs in the near future".

"This Barred Rock bird will provide an opportunity for backyard farmers to earn supplementary income through the sale of eggs to their neighbours, just as they do with broiler meat," Conley said.

Patterson said the farmers account for over 50 per cent of all eggs produced in Jamaica, which are sold through various channels - local community, schools, restaurants, supermarkets, wholesales, as well as consumed in the home.

They also produce roughly 35 per cent of all broiler meat consumed in Jamaica, which is sold through various retail and wholesale channels.

Patterson said that while Hi-Pro still provides the commercial laying breed - Novogen Layer - the new Barred Rock chick is a meat and egg bird that is more suited to backyard farming because of temperament, hardiness and egg-laying ability.

Barred Rock chicks sell wholesale at $245 versus $175 for a Novogen chick, but retail prices may vary in local farm stores in each parish, the manager said.

He noted that small farmers producing eggs represent " a developing market which we will continue to monitor over the next 12 months".