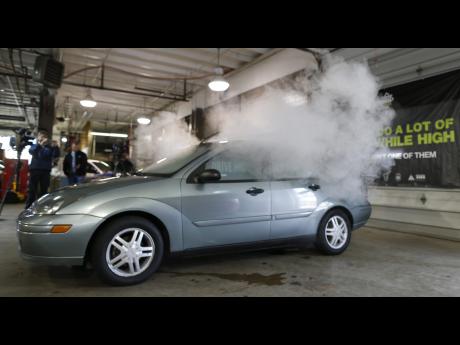 AP
In this April 16, 2015 file photo, smoke created by water vapor billows out of the windows of a car, used by Colorado to fight stoned driving with youth demographics, during a demonstration by the Colorado Department of Transportation in southeast Denver. (AP Photo/David Zalubowski, file)

The Highway Loss Data Institute, a leading insurance research group, said in study results released Thursday that collision claims in Colorado, Washington, and Oregon went up 2.7 per cent in the years since legal recreational marijuana sales began when compared with surrounding states.

Legal recreational pot sales in Colorado began in January 2014, followed six months later in Washington, and in October 2015 in Oregon.

"We believe that the data is saying that crash risk has increased in these states and those crash risks are associated with the legalisation of marijuana," said Matt Moore, senior vice-president with the institute, which analyses insurance data to observe emerging auto-safety trends.

Mason Tvert, a marijuana legalisation advocate and communications director with the Marijuana Policy Project, questioned the study's comparison of claims in rural states such as Idaho, Wyoming, and Montana with Colorado, Oregon and Washington that have dense population centres and how that affected the study's findings.

"The study raises more questions than it provides answers, and it's an area that would surely receive more study, and deservedly so," Tvert said.

Researchers accounted for factors such as the number of vehicles on the road in the study and control states, age and gender of drivers, weather and even whether the driver making a claim was employed. Neighbouring states with similar fluctuations in claims were used for comparison.

Insurance industry groups have been keeping a close watch on claims when auto accidents across the country began to go up in 2013 after more than a decade of steady decline. Insurance companies found several possible factors at play in the spike that included distracted driving through texting or cell phone use, road construction, and an improved economy that has led to leisurely drives and more miles driven, as well as marijuana legalisation.

"It would appear, probably not to anyone's surprise, that the use of marijuana contributes to crashes," said Kenton Brine, president of the industry group Northwest Insurance Council that represents companies in Washington, Oregon and Idaho. He added: "It would be difficult to say that marijuana is a definitive factor, lacking a citation, in a significant number of crashes to say that what we're seeing here is a trend."

"The problem here is that it's a pretty new experience," said Carole Walker of the Rocky Mountain Insurance Information Association, an industry group that covers Colorado, Wyoming, Utah and New Mexico. "This is the first study that has been able to isolate legal pot as one of the factors."

Insurance Institute for Highway Safety spokesman Russ Rader adds that alcohol-impairment remains one of the biggest concerns on the road.

"While we have proven countermeasures, proven strategies for reducing alcohol-impaired driving, there are a lot of unanswered questions about marijuana and driving," Rader said.

A study released last year by AAA's safety foundation found legal THC limits established by states with legal marijuana have no scientific basis and can result in innocent drivers being convicted, and guilty drivers being released.

Moore from the Highway Loss Data Institute, said they hope the study's findings will be considered by lawmakers and regulators in states where marijuana legalisation is under consideration or recently enacted.