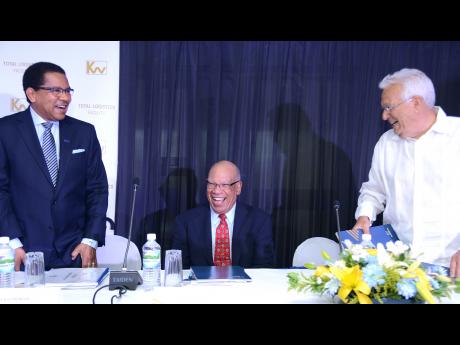 Kingston Wharves Limited (KWL) will be rolling out a number of measures that will made it more efficient to clear goods from its facilities, including motor vehicles, Chief Executive Officer Grantley Stephenson disclosed on Thursday.

The plans include transferring all warehousing activities within the next two months to KWL's Total Logistics Facility, which is soon to be officially commissioned.

"The idea is that there will be no more warehouses on the terminal," Stephenson said.

Kingston Wharves' next step is that it will be creating a domestic motor vehicle centre at Tinson Pen at Marcus Garvey Drive in Kingston.

"So all domestic motor vehicles will be relocated from the terminal facility to Tinson Pen, and the full range of services will be provided at that facility," Stephenson told shareholders at the company's annual general meeting, held at the near-complete Total Logistics Facility.

"What this will do is that it will eliminate the necessity for customers to come on to the terminal, other than truckers coming in to collect containers," he said.

"So we will hopefully have much cleaner and safer terminals, while at the same time delivering substantially more efficient service to our customers."

"What we want to do is to move all of the domestic cars and create a one-stop centre. The cars will be stored there and customs brokers" and others who are usually involved in the clearance process will use that facility, Stephenson told the Financial Gleaner.

Asked if buildings will be constructed at the Tinson Pen facility, Stephenson said "we won't need permanent structures to do that. It will be a well secured area because, of course, Customs will demand that, well-lit and be able to accommodate all the facilities that are necessary to process motor vehicles."

That facility is expected to come on stream within three to four months, said the Kingston Wharves CEO, noting that "we have started the process." He said the new facility will not affect operations at the Tinson Pen aerodrome.

Kingston Wharves also introduced a Pay & Go system just before Christmas last year "where we attempted and I think, to a large extent, were successful in removing the wait time by doing a lot of the processing before the customer actually arrived" for their goods, Stephenson said.

"We intend to pilot in this building (the Total Logistics Facility) a new system where we will be doing quick clearance. So the objective is that by the end of the year, we should be operating somewhat like ShipMe or other companies which provide this kind of service," he said.

"So gone will be the days when you would come here and spend half a day sitting and waiting. We will have cargo assessed. You can make your payments online, print your receipt and then just come and collect. So this will be a new day in terms of delivering service."

"We are at the forefront of the national initiatives to improve the ease of doing business by creating a portfolio of new or remodelled high-quality warehousing, office, production and open storage space that allow businesses to immediately benefit from the Special Economic Zone legislation," the CEO said.

In its financial results for the first quarter ending March 2017, highlighted at the meeting, the Kingston Wharves Group achieved revenues of $1.4 billion, a 16 per cent or $189-million increase over the corresponding period in 2016.

Net profit attributable to shareholders increased by 20 per cent, or $56 million, to $333 million, pushing earnings per share up from 19 cents to 23 cents.