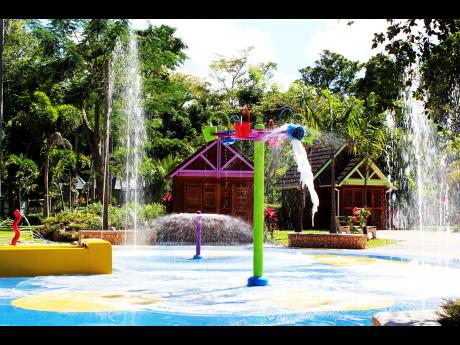 A section of the new facilities at Dunns River Falls and Park.

Completed in the first quarter of 2017, the project represents a push to diversify the offerings at the world-famous falls.

The Urban Development Corporation (UDC) said it invested $122.5 million in the development, which also included the new central gardens. The attraction features a waterslide and a splash pad for children, kiosks for ice cream and pizza concessions, as well as more adult fare in the form of sealed liquor, all meant to "boost the experience of the customer and the commercial life of the park", UDC said in written responses to Sunday Business queries.

Checks with staff at the property indicate that the products are popular, especially among children.

"It is too popular," commented one staff member. "On some days we have close to 400 (children)," she said.

Dunn's River is a large money spinner for UDC, which manages the St Ann based attraction through subsidiary St Ann Development Company.

"Dunn's River continued to be the star performer in the portfolio, welcoming over 700,000 visitors during the review period, with 86 per cent being non-resident patrons," UDC commented in the report.

Among the new offerings introduced this year was a DRFP Logo Shop, which sells memorabilia.

The UDC, which manages a number of attractions and parks, is undertaking a new public-private partnership for redevelopment of Fort Clarence Beach Park.

And: "Preliminary planning is now under way for the upgrading of green spaces and other beach parks around the island. More details will be shared as plans are finalised," the state agency said.