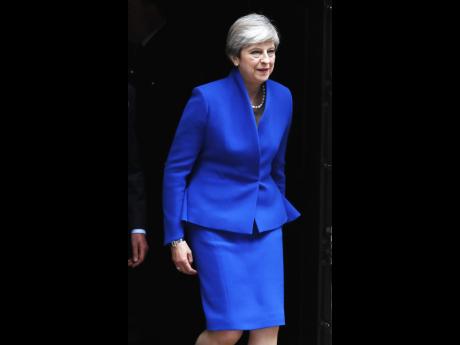 AP
Prime Minister of the United Kingdom, Theresa May.

The United Kingdom economy faces the prospect of barely growing in the run-up to the country's exit from the European Union in less than two years, one of the world's leading credit ratings agency warned Tuesday.

In a bleak assessment of the country's economy, Standard & Poor's said growth is set to slow from 2016's 1.8 per cent to 1.4 per cent this year and 0.9 per cent next, and added it could be even worse.

Overall, Glass said growth is set to remain modest as higher inflation - largely stoked by the sharp fall in the pound following last year's Brexit vote - squeezes household budgets if pay growth doesn't keep up. Uncertainty over the outcome of the Brexit discussions, which started in earnest last month, is also expected to dampen investment as firms become cautious.

S&P was one of many forecasters to warn of the immediate impact of the Brexit vote and soon after stripped the country of its AAA credit rating. The British economy performed much better in the aftermath of the vote, largely because of what the firm terms "extraordinarily robust consumer spending".

However, recent evidence suggests that retail spending, one of the cornerstones of the economy, is waning as prices rise. Since the Brexit vote, annual inflation has risen from 0.5 per cent to 2.9 per cent, markedly above the Bank of England's target of two per cent.

Glass said the economic backdrop could get even more precarious if the talks between the British government and the EU stall.

The EU has insisted that the 'divorce' settlement needs to be addressed first before any talks can start on a new post-Brexit trade relationship. Failure to agree on the divorce could raise the prospect of Britain crashing out of the EU by March 2019 with no deal a so-called 'hard Brexit' scenario that will see tariffs slapped on many British goods and chunks of the country's services sector locked out.

S&P said that scenario could lead to even weaker growth if it causes a further fall in the pound and rise in inflation. Though a lower currency can help exporters sell abroad, as it appears to have done in the immediate aftermath of the Brexit vote, it also raises the cost of imported goods, such as food and energy.

Even if the pound doesn't fall further from its current level of around US$1.30 if the negotiations stall, Glass said the British economy faces further difficulties, especially if firms activate their contingency plans and relocate staff out of the country.

Above-target inflation has prompted some policymakers at the central bank to push for higher interest rates. Others, though, think that the economy is so weak it would suffer further from higher borrowing rates. S&P expects that, on balance, the central bank will not raise its benchmark rate from the record low of 0.25 per cent until the summer of 2019, after Brexit actually happens.

Ben Broadbent, a deputy governor at the Bank of England, warned on Tuesday about the potential repercussions if barriers go up between Britain and its main export market.

"Put simply, a significant curtailment of trade with Europe would force the UK to shift away from producing the things it's been relatively good at, and therefore tends to export to the EU, and towards the things it currently imports and is relatively less good at," he said in a speech.