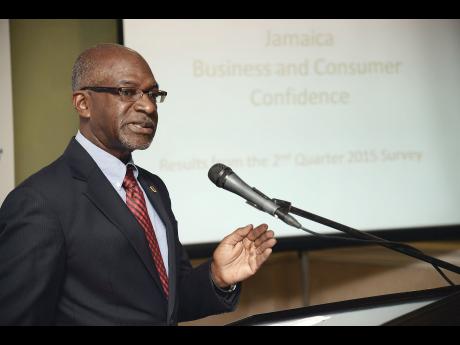 Half of all firms see crime as the top problem facing the nation, according to the latest survey of business and consumer confidence released on Tuesday.

It comes amid a surge in murders and a clampdown on communities by the security forces. The numbers who view crime as a top priority have increased, but overall, business and consumer confidence remains high.

In the June quarter survey, there was a slight dip in business confidence, but consumer confidence continued to head north in the quarter, but was still off its high one-year high.

"Businesses say the largest deterrent is crime and violence. I am not saying that there is a correlation yet, but it could be the reason for the fall," said Don Anderson, managing director at Market Research Services Limited, which conducts the survey on behalf of the Jamaica Conference Board.

The survey indicated that during the review period, crime and violence "became a critical concern, reported by half of all firms as the top problem facing the nation". Still, the researchers found that confidence remains strong, supported by the fact that both the Index of Current Economic Conditions and the Expectations Index have been more favourable over the past six quarters than any time during the past 17 years.

Anderson indicated that generally speaking, respondents view crime as a general concern rather than their own reality. He was unable to extrapolate whether the perception or actual rise in criminality would negatively impact the results of upcoming surveys.

"There is a perception that crime is out of control but when you ask them about crime affecting 'you or your community', it is generally low," Anderson said.

Market Research Services interviewed 600 persons for the latest survey, which was developed by the Survey Research Centre at the University of Michigan in the USA in collaboration with the Jamaica Conference Board, a unit of the Jamaica Chamber of Commerce.

"I don't think the survey reflects the sensational crime in these numbers. We hear about most of the crime on TV and in the newspapers, and currently, the media is showing a crime surge. But largely, crime is anecdotal," reasoned Michael McMorris, a vice president of the Jamaica Chamber, speaking at the release of the confidence indices.

"There is a renewed belief, certainly in the construction sector, that jobs will become available. If it doesn't materialise shortly, then the indices will likely fall," Anderson said.