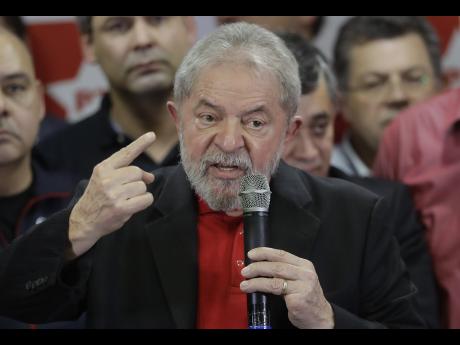 A federal judge found Lula guilty the previous day and sentenced him to nearly 10 years in prison, though the charismatic leader remains free while an appeal is heard.

Speaking to supporters as sweat dripped from his forehead, the man popularly known as simply 'Lula' said the court had no proof and the conviction was politically motivated. To cheers, he said he wants to run for re-election next year.

"If anyone thinks that with this sentence they will pull me out of the game, they should know that I am in the game," he said. "The only people who can declare my end are the Brazilian people."

At various points, the crowd broke into cheers of "Lula for president!" A supporter raised a poster behind him that read, "Election without Lula is a fraud."

Lula was accused of receiving a beachfront apartment and repairs to the property as kickbacks from construction company OAS. He never owned the apartment, but prosecutors argued it was intended for him.

The case is part of Brazil's largest-ever graft investigation, in which dozens of top politicians and business people have already been jailed. It has also led to a corruption charge against current President Michel Temer, who could be suspended and put on trial if the lower house of Congress votes to accept it.

Lula is the highest-profile figure to be convicted so far, and the first Brazilian ex-president to be found guilty in a criminal proceeding at least since the restoration of democracy in the 1980s.

Lula was Brazil's first working-class president and remains beloved in many quarters, though the corruption probe has dented his reputation. He faces charges in four other cases, but has been considered a front-runner for next year's election.

He left office at the end of 2010 with sky-high popularity after riding an economic boom to fund social programmes that pulled millions out of poverty and expanding the international role of Latin America's biggest nation.

The case now goes before a group of magistrates. If they uphold the conviction, Lula would be barred from seeking office.

Prosecutors said they would appeal seeking to increase the nine and a half year sentence.