Tillerson wraps up Gulf tour, but impasse grinds on 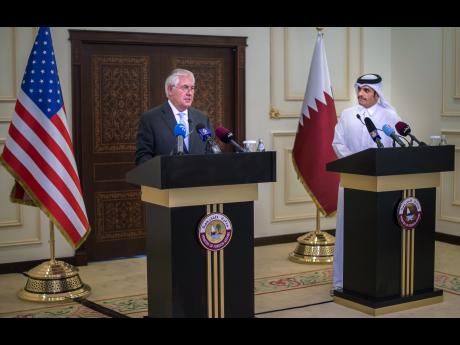 AP
In this Tuesday July 11, 2017 photo US Secretary of State Rex Tillerson, left, and the Qatari Minister of Foreign Affairs Sheikh Mohammed bin Abdulrahman Al Thani take part in a press conference in Doha, Qatar. Tillerson arrived in Qatar as he tries to mediate a dispute between the energy-rich country and its Gulf neighbours. (Alexander W. Riedel/US State Department via AP)

The top United States diplomat wrapped up his first foray in shuttle diplomacy on Thursday with little sign of progress in breaking a deadlock between Qatar and four Arab neighbours that are isolating it.

US Secretary of State Rex Tillerson travelled to the tiny, US-allied Gulf nation for a second time for a lunch meeting with 37-year-old Emir Tamim bin Hamad Al Thani before heading back to Washington later in the day.

Tillerson and his Qatari counterpart appeared before cameras in the capital, Doha, but ignored reporters' questions before he left.

Tillerson, a former Exxon Mobil CEO with deep experience in the oil-rich Gulf, has been shuttling between Qatar, Saudi Arabia and mediator Kuwait since Monday, trying to repair a rift that is dividing some of America's most important Mideast allies.

Officials have downplayed expectations and say any resolution could be months away.

His clearest achievement has been to secure a memorandum of understanding with Qatar to strengthen its counterterrorism efforts and address shortfalls in policing terrorism funding.

That deal goes to the core of the anti-Qatar quartet's complaints against the natural gas-rich state: that it provides support for extremist groups.

Qatar vehemently denies the allegation, though it has provided aid that helps Islamist groups that others have branded as terrorists, such as the Muslim Brotherhood and the Palestinian militant group Hamas.

The anti-Qatar bloc argues that the pressure and demands it has placed on Qatar helped lead to the counterterrorism pact, but it says the agreement does not go far enough to end the dispute.

It is holding fast to its insistence that Qatar bow to a 13-point list of demands that includes shutting down Qatar's flagship Al-Jazeera network and other news outlets, cutting ties with Islamist groups such as the Muslim Brotherhood, limiting Qatar's ties with Iran, and expelling Turkish troops stationed in the tiny Gulf country.

Qatar has rejected the demands, saying that agreeing to them wholesale would undermine its sovereignty.

It is intent on waiting out the crisis despite its neighbours' attempts to isolate it.

Shipping companies have set up alternative routes to get supplies in without going through the blockading countries, and flag carrier Qatar Airways continues to operate its 200-strong fleet by detouring over friendlier airspace.

The government says it is covering a tenfold increase in shipping costs for essentials. Ally Turkey and nearby Iran have also boosted exports to Qatar, and the country has even taken to importing cows to meet a dairy shortfall caused by the closure of its only land border with Saudi Arabia.

Still, the rift is causing hardship for some.

Human Rights Watch said Thursday the dispute has left families separated, forced students out of their universities, and impeded medical care, including for a child who missed a scheduled brain surgery.

The rights group also raised concerns about migrant workers based in Qatar who have been left stranded in Saudi Arabia and others in Doha who are struggling with a rise in food costs because of the blockade.

"Gulf autocrats' political disputes are violating the rights of peaceful Gulf residents who were living their lives and caring for their families," Sarah Leah Whitson, the group's Mideast director, said in a statement.

Meanwhile, the squabble among five of its Mideast allies has put the United States in an uncomfortable position and risks complicating the Pentagon's operations in the region.

Qatar hosts al-Udeid Air Base, the largest US military installation in the Middle East and hub for US-led operations against the Islamic State group in Iraq and Syria. Bahrain is home to the US Navy's 5th Fleet, while American surveillance planes and other aircraft fly from the UAE.