A year after vote, UK unveils bill to make Brexit a reality 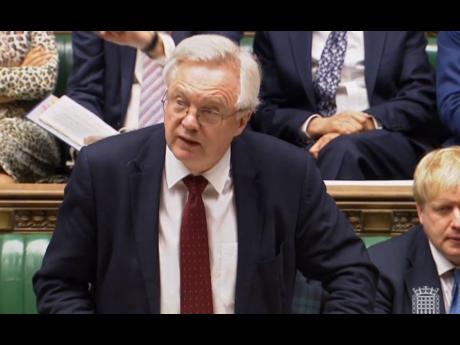 There is no divorce without paperwork. Just over a year after Britons voted to leave the European Union, the United Kingdom government on Thursday unveiled the first piece of legislation to make it a reality - a 62-page bill that opposition politicians are already vowing to block.

The European Union (Withdrawal) Bill aims to convert some 12,000 EU laws and regulations into UK statute on the day Britain leaves the bloc. That is scheduled to be in March 2019.

All those rules can then be kept, amended or scrapped by Britain's Parliament, fulfilling the promise of anti-EU campaigners to "take back control" from Brussels to London.

The government says the bill will ensure continuity - law on the day after Brexit will be the same as on the day before. Brexit Secretary David Davis said the legislation will allow Britain to leave the EU with "maximum certainty, continuity and control".

But opponents of Prime Minister Theresa May's Conservative govern-ment fear the legislation gives officials powers to change laws without sufficient scrutiny by lawmakers. They worry the government could water down environmental standards, employment regulations or other measures brought to Britain through EU law since it joined the bloc in 1973.

Contentiously, the bill gives the government powers to fix "deficiencies" in EU law by what's known as statutory instruments, which can be used without the parliamentary scrutiny usually needed to make or amend legislation. Such powers are often referred to as 'Henry VIII powers' after the Tudor king's bid to legislate by proclamation.

Andrew Blick, a politics lecturer at King's College London, said such executive powers are "a very sensitive subject" and likely to face opposition.

"Henry VIII powers have been used before, but here they apply to a very, very wide range of law," Blick said.

Charles Clark, partner consultant at law firm Linklaters, said the sheer number of legal changes needed - 800 to 1,000 by the government's estimate - meant Brexit could be "a mind-blowingly complicated, logistical exercise.

"My worry is, we will be faced with death by statutory instrument," he said. "It's going to be very expensive in terms of parliamentary and public time, and business time."

The bill also states that Britain will no longer enforce the EU's Charter of Fundamental Rights after Brexit. Officials say similar protections are offered by other measures, including the European Convention on Human Rights, which Britain will still adhere to.

Concerned about power of bill

But civil liberties groups are concerned. Amnesty International and Liberty said the bill "gives ministers vague and broad powers that could be used to erode our rights and freedoms without proper scrutiny by those elected to protect them".

The bill is not expected to face debate in Parliament until the fall, and May's minority government - weakened after a battering in last month's general election - faces a fight.

Liberal Democrat leader Tim Farron said getting the bill passed would be "hell" and predicted the government faced "a parliamentary version of guerrilla warfare".

"The issue Theresa May is going to face is that if she makes concessions, she could face rebellion from the more fervent eurosceptics in her party - and if she doesn't, there's a risk of rebellion from another direction," said Blick. "And if she's really unlucky she'll get both."