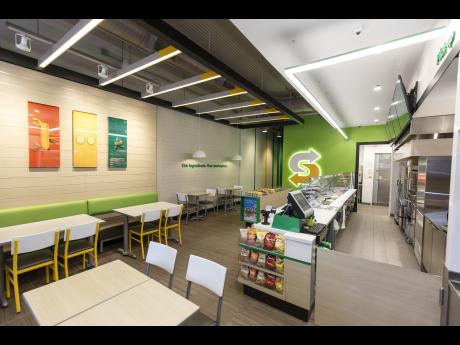 The American sandwich chain says that the redesign - which includes a brighter atmosphere, displays of vegetables behind the counter, and ordering tablets - is the first major revamp since the early 2000s. The changes will take place as stores around the United States are remodelled and new ones are built.

The makeover comes as Subway's sales have fallen for four straight years amid competition from places including Jimmy John's and Firehouse Subs. Since 2012, Subway's average annual sales per store are down 13 per cent at US$420,000, according to industry tracker Technomic. Last year, its number of US stores also shrank for the first time, though it still had more than 26,700 locations.

Don Fertman, Subway's chief development officer, says that franchisee agreements require them to remodel stores every seven to 10 years. Fertman says the current "Tuscany" design was intended in part to reflect the Italian heritage of founder Fred DeLuca, who died in 2015. His sister, Suzanne Greco, is now CEO of the privately held company.

"It's been working for us since the early 2000s," Fertman said but noted that it was time to evolve.

In the US and Canada, new stores will be built using the redesign. About 150 stores will get the new look in the coming months, Fertman said. By the end of next year, he said 3,000 to 5,000 stores globally should have it, with most of those being in the United States and Canada.

Some have reservations about the plans.

John Gordon, a restaurant industry analyst, said Subway might be better off focusing on improving its food before turning to remodelling, given the tight financial situations of many franchisees.

While the company hasn't yet specified the cost, the remodelling looks like it will be pricey for franchisees, notes Keith Miller, who has three Subway stores in Northern California.

Miller, who is also head of the Coalition of Franchisee Asso-ciations, said two key questions are whether remodelling would boost sales and whether franchisees can afford it. If franchisees can't afford it, Miller said it's not really a solution.

"How do you require someone to do something that they can't financially do?" he said.