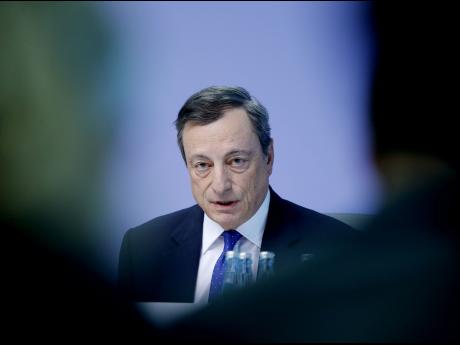 AP
In this Thursday, April 27, 2017 file photo, president of the European Central Bank, Mario Draghi, speaks during a news conference in Frankfurt, Germany.

European Central Bank (ECB) head Mario Draghi is likely to tread softly on Thursday as the bank inches towards bringing an end to its monetary stimulus efforts.

Analysts think it's a near-certainty that the ECB, the monetary authority for the European Union's 19-country euro currency union, will start scaling back its €60 billion (US$69 billion) in monthly bond purchases after their earliest termination date at the end of the year.

But they don't expect Draghi to provide the road map for the exit at Thursday's news conference, which will follow the regular meeting of the bank's 25-member governing council at the bank's Frankfurt skyscraper headquarters. The bank is expected to leave its interest benchmark unchanged at zero. More clarity on the timing of the stimulus withdrawal is expected at the September 7 meeting.

The reason why little is expected right now: Draghi and top bank officials want to avoid a sudden market reaction that could prematurely send business and government borrowing costs higher before the phase-out starts.

The caution may be understandable given the reaction to Draghi's speech on June 27 in Sintra, Portugal, where he talked about the "strengthening and broadening" eurozone recovery but signalled no definite shift in the bank's stance.

Markets reacted sharply anyway, helping to send the euro higher - it's recently pushed above US$1.15 for the first time since May 2016 - and bond prices lower. The sudden moves suggested that some market participants were still unprepared for an end to the stimulus, which the bank says has played a big role in shoring up the economic recovery in the eurozone by keeping a lid on market interest rates.

The market reaction echoed the so-called 'taper tantrum' that followed remarks by then US Federal Reserve head Ben Bernanke in May, 2013. United States government bonds prices sagged after Bernanke indicated that the economic recovery would mean the Fed could taper off its own bond-purchase stimulus. That programme has since been ended and the Fed has started raising interest rates.

Draghi is expected to underline the need for caution in withdrawing the stimulus, even while pointing out the eurozone's strengthening recovery.

A raft of indicators in recent months has raised expectations that the eurozone recovery has gained momentum and that growth will come in stronger than anticipated. Many economists are predicting that growth will be north of two per cent this year.

Inflation remains the main problem confronting the ECB. The primary purpose of the bank's stimulus efforts is to get inflation up to its goal of just under two per cent. In the year to June, it was only 1.3 per cent.

"We expect Draghi to refer to the need for 'patience' and 'prudence' as well as the need for 'persistent' monetary policy support in a bid to signal that normalisation will be gradual," Ben May, lead eurozone economist at Oxford Economics, said.

He added that the ECB "is unlikely to provide any firm guidance" on what will happen to the bond purchases next year.

Market watchers will focus on the bank's standing promise that it could increase the purchases in size or duration if the outlook worsens. Dropping that promise from the post-meeting statement would be a small move towards announcing a phase-out of the stimulus. Several analysts, however, think Draghi won't go even that far.

The ECB's bond purchases began in March, 2015 in an effort to raise inflation and avoid a crippling downward price spiral. The ECB purchases the bonds with newly created money, pushing that new money into the financial system and the economy. Printing money can in theory cause higher inflation, but prices have responded only slowly.

Analysts think the ECB will have to end the programme by the end of next year in any case because it will run out of available bonds to purchase. The bank has restricted itself to purchasing no more than a third of the bonds issued by any country. That is to avoid charges that it is dominating the market for that country's debt and propping up government finances, something it is legally restricted from doing.