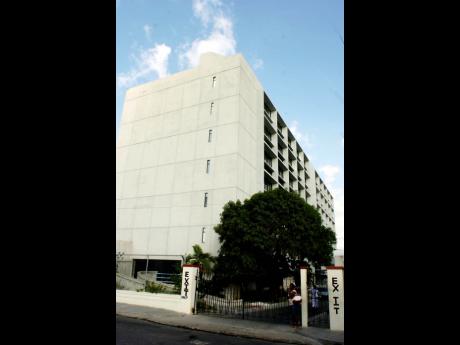 Norman Grindley
The Ministry of Finance at National Heroes Circle in Kingston.

Word filtering around local trading desks is that the Government of Jamaica (GOJ) is considering floating a new bond externally, but might try other options first.

Jamaican bond traders are hoping the Government will opt for a global bond.

"We heard whispers that they might try the international capital markets, but we also heard that they might be trying to sort it out locally," said Evette Bryan, treasury manager at Victoria Mutual Wealth Management.

Other analysts also told Gleaner Business now would be a good time to enter the market, especially since the finance ministry just wrapped up a roadshow that was seen as successful.

Jamaica's last foray in the international capital market ICM, was the repurchase of its 2017 and 2019 bonds in August 2016, simultaneously raising US$1.2 billion from investors to finance the purchase. Those notes paid interest at 10.625 per cent and 8.0 per cent, respectively.

With favourable credit ratings, average yields on GOJ global bonds as well as the spreads between these yields and benchmarks have fallen to record low levels, indicating that Jamaica is viewed favourably by the international capital market, the Bank of Jamaica said in its most recent Quarterly Monetary Policy Report.

"Things are dead right now," said the VM trading manager. "A lot of persons are just watching and hoping. For the most part, there is not much activity. We are basically still waiting to see how it will impact the curve," she said.

Yields for bonds maturing within the next four years are within the range of 0.47 per cent (2017) to 4.92 per cent (2020). For the bonds of longer tenure, yields are currently below seven per cent.

Jamaica has eleven bonds outstanding on the international market, valued at US$5.6 billion, or approximately 55.1 per cent of total external debt. Their tenors range between two and 30 years and coupons range between 5.25 per cent and 11.63 per cent the Bank of Jamaica said in its most recent Quarterly Monetary Policy Report.

"Given that the market is doing well - and they do have scheduled maturities starting two years from now - you might think they may not really need any funds, but if they have development plans and need financing, and if the market is working in their favour, they might want to take advantage of it," Bryan said.

One analyst, who requested anonymity, said Jamaica's recent non-deal roadshow was seen as successful, and that usually when they get that type of response, they would go to market to raise capital.

"The Government of Jamaica has issued a request for proposal (RFP) to brokers for an ICM issue. It means that they are very serious about it, but it does not mean that they will do it, especially if they do not like the results of the RFP," he said.

Another said he has not seen the RFP, but if Jamaica aimed to raise funds overseas, it would more likely be issued to brokers in those markets.

The Debt Management Unit of the finance ministry did not respond to requests for comment up to press time.