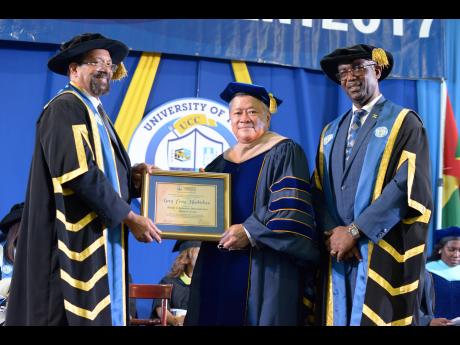 The University of the Commonwealth Caribbean (UCC) has conferred the honorary degree of Doctor of Business Administration on Gary Craig Hendrickson in recognition of his achievements in business and industry.

The presentation was made during UCC’s 2017 commencement ceremony at the National Arena on Sunday.

In addressing the gathering, Hendrickson, Chief Executive Officer of Continental Baking Company Limited, bemoaned the lack of standards in many areas of national life and implored the graduating class and the population in general to strive for world-class standards.

He said that Jamaica can achieve excellence in innovation as demonstrated in sports, music, medicine and literary expressions.

Noting that many Jamaicans were succumbing to the get-rich-quick-mentality, Hendrickson emphasised that success must be preceded by hard word.

Past recipients of the honorary degree from the UCC include Richard Byles, former president and CEO of Sagicor; Bruce Bowen, former CEO and President of Scotiabank Jamaica, Professor Errol Morrison, Director General of the National Commission on Science and Technology; and Professor Henry Lowe, medicinal chemist.

NOTE: An earlier version of this story had incorrectly reported that Digicel's former CEO Barry O'Brien was a recipient of the honorary degree.