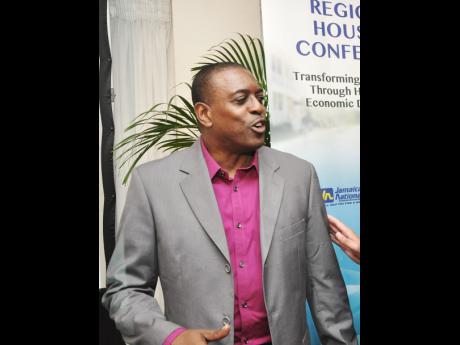 The purpose of MII is to protect mortgage lenders against loss in the event of default by mortgagors. MII premiums are a one-time payment calculated at seven per cent of the value of a housing loan for the life of the policy. Each housing unit is covered individually.

The mortgage bank will under-write up to 25 per cent of a mortgage.

"We have now signed up all the major mortgage providers as 'approved lenders' of the MII product. We have seen the market shift to lending at 95 per cent with a few lenders at 97 per cent," Wynter told Gleaner Business.

Through an upgraded MII plan, the state-owned bank will insure up to 97 per cent of mortgage loans.

National Housing Trust (NHT), which is Jamaica's largest mortgage lender, has not signed up to MII, but Wynter said he expects the housing agency, which is also state-run, would soon come on board. However, its commitment may relate only to a new financial inclusion project and not all of its portfolio, it appears.

At last estimate provided by the Ministry of Finance's Public Bodies Report on state agencies, NHT had a mortgage loan portfolio of $206 billion.

"We anticipate they will sign up soon," Wynter said, adding that only the NHT could describe the size of its intended commitment in this new area. Queries sent to the NHT were unanswered up to press time.

Together, National Housing Trust, Jamaica National, and Victoria Mutual Building Society hold more than 80 per cent of the mortgage market.

According to the 2016 edition of the Economic and Social Survey of Jamaica, the total value of mortgages disbursed last year was $37.44 billion - representing an increase of 7.8 per cent.

The JMB, meanwhile, is reporting a third straight year of positive results, with profit before tax increasing by nearly a quarter from $93.3 million to $115.9 million at year ending March 2017. In 2015, the mortgage bank reported pretax income of $39 million.

Wynter said the bank's loan portfolio, consisting of construction lending, increased by 42 per cent to $1.7 billion, up from $1.2 billion the year before. Among JMB's clients is student housing developer 138 Student Living Limited, which is building over 1,500 new dorms and rehabilitating other accommodations at the University of the West Indies.