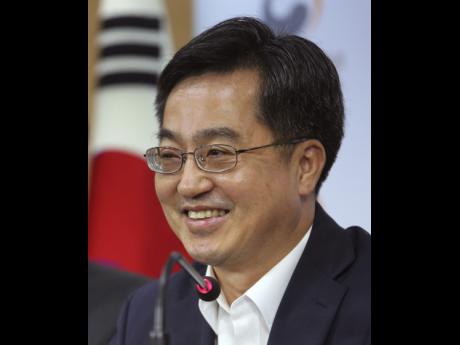 AP
South Korean Finance Minister Kim Dong-yeon smiles during a press conference at the government complex in Seoul, South Korea, Tuesday, July 25, 2017. South Korea’s new administration is shifting gears to achieve a fair and labour-friendly economy after decades of growth led by big businesses left many behind in economic prosperity. 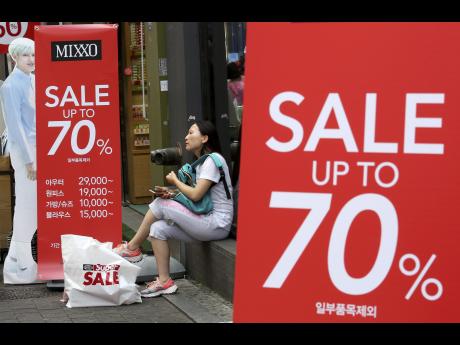 AP
A shopper sits in front of discount sale signs at store in Seoul, South Korea, Tuesday, July 25, 2017. South Korea’s new administration is shifting gears to achieve a fair and labour-friendly economy after decades of export-driven growth led by big businesses left many behind in economic prosperity.
1
2

South Korea's new administration is shifting gears to achieve a fair and labour-friendly economy after decades of export-driven growth led by big businesses left many behind in economic prosperity.

Under the plan, South Korea plans to sharply increase the minimum wages and unemployment benefits and impose bigger fines for unfair business practices, among other measures.

The plan also calls for improving transparency and governance at South Korea's family-controlled big businesses, or chaebol, and fixing unfair dealings between big companies and their small contractors. There are also a set of measures aimed at improving labour conditions, such as reducing long working hours.

The announcement marks "a complete paradigm shift" in the South Korean economy, President Moon Jae-in said during a Cabinet meeting, according to the presidential office's pool report. Citizens should feel during their daily economic activities that South Korea has become a fair and just country, Moon told ministers earlier in the day.

"The beginning of the new paradigm will be people," Finance Minister Kim Dong-yeon told reporters. "To shift the paradigm, the future economic policy will focus on four directions: income-driven growth, jobs-focused economy, innovation and fairness."

The ministry raised its growth forecast for Asia's fourth-largest economy this year to 3 per cent from its earlier outlook of 2.6 per cent, citing a recovery in exports and the government's stimulus plans. Next year, increased household income and more jobs will help support the economy to achieve 3 per cent growth, it said.

Those forecasts are more optimistic than other domestic or international institutions, which predict an upper 2 per cent growth for the economy.

South Korea's economic recovery has been picking up steam in recent months thanks to the global improvement in trade and its big exporters, in particular tech companies like Samsung and SK Hynix that saw record profits amid tight supplies and strong demand for computing memory chips.

But individual Koreans are feeling left out. They have thin social safety nets to help them when they lose jobs or when they become too old to work. Young college graduates are fretting about jobs amid high youth jobless rates while the elderly poverty is the highest among developed countries. The country has also struggled with stubbornly low birth rates for more than a decade.

With heavy household debts and increased gaps between full-time regular jobs and irregular jobs and also a wide gap between those employed by the big businesses and those working at small companies, South Korean household incomes did not increase as fast as corporate income, and consumption has not picked up as much as corporate spending.

Moon became president in May after the ousting of Park Geun-hye, whose administration became mired in corruption scandals involving big businesses.

The chaebol and the entrepreneurs who founded them were praised for building an economic miracle from the ashes of the Korean War at a time when little attention was paid to grim labour conditions.

But many of the second and third generations of the chaebols' founding families have been convicted of embezzlement or other crimes of corruption or related to the unfair generational transfer of wealth and corporate leadership. The chaebol are also criticised for dominating the economy to a degree that stifles competition and hinders small companies.

Moon's five-year economic plan marks a goodbye to the Park era. He has vowed to fix the economy by putting jobs and labourers first.

By 2022, the minimum wage will reach 10,000 won (US$9) per hour, up about 30 per cent from 2018. Government subsidies to infants, young job seekers and the elderly will be increased while the unemployment benefits will go up by 10 percentage points.

It also seeks to reduce South Korea's notoriously long working hours, which are the second-highest among the developed countries, it said.