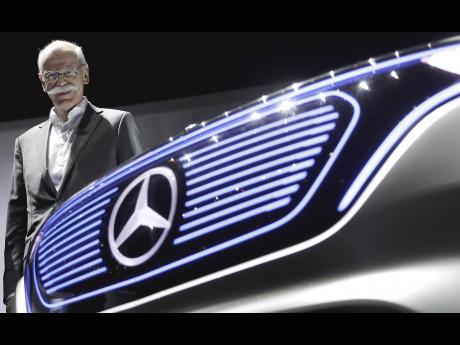 AP
In this March 29, 2017 file photo Dieter Zetsche, CEO of the Daimler AG, poses next to Mercedes Benz prior to the shareholders meeting of the car maker in Berlin, Germany. (AP Photo/Michael Sohn, file)

German automaker Daimler's profits barely rose and were short of market expectations as its Mercedes-Benz luxury car division boomed while earnings lagged at its truck, van and bus businesses.

The second-quarter results were overshadowed by the growing controversy over diesel technology hanging over the automaker - and the auto industry in general - ahead of a meeting in Germany of carmakers and government officials next week.

The Stuttgart-based company reported Wednesday that net profit was up a scant two per cent compared with a year ago, to €2.51 billion (US$2.9 billion). Revenue increased seven per cent to €41.16 billion (US$48 billion).

The profit was short of analyst estimates for €2.61 billion as compiled by financial information provider FactSet. On the bright side, the Mercedes division had its best quarter for unit sales ever and €2.4 billion (US$2.8 billion) in operating profit. Mercedes division profits were boosted by strong sales of the E-Class sedan, which is equipped with extensive driver-assistance technology, and of the company's SUVs, which bring high profits per vehicle.

But operating earnings fell 13 per cent in its truck business, and also lagged at the van and bus divisions.

The company reiterated that profits would "increase significantly" once again in 2017.

The earnings announcement takes place amid extensive public discussion of the future of diesel and what to do about excessive pollution emissions. The government has summoned carmakers to a diesel summit on August 2 to try to lower pollution levels and ensure the technology has a future. There have been calls for diesel bans in several German cities.

CEO Dieter Zetsche said during a conference call with journalists that the company's newest generation of diesel engines offered lower emissions and that diesel can make an important contribution to reducing emissions of carbon dioxide, a greenhouse gas blamed for global warming.

Daimler has said it will update engine software on three million diesel cars to improve their emissions performance and reduce customer uncertainty about the technology. Zetsche said customers were responding positively to the service action.

The action - which Daimler is not calling a "recall" - will reduce emissions in cities with high pollution levels more than a diesel ban could, Zetsche said.

Diesel vehicles need pollution controls to limit emissions of nitrogen oxide, which reacts with other compounds to create smog and can harm people's health. But diesels emit less carbon dioxide than do gasolene motors.

Der Spiegel reported Friday that German automakers including Daimler had colluded for years on diesel technology and other issues and had agreed to limit the size of the tanks for the urea solution used to reduce emissions of nitrogen oxides.

The European Commission, the EU's executive body, is assessing the matter. The company has said it cannot comment on "speculation". An antitrust ruling that the companies illegally restrained competition could lead to heavy fines.

German prosecutors have searched Daimler offices as part of a probe into possible emissions manipulation, and US authorities have asked Daimler to conduct an internal investigation into its emissions certification procedures. The company said Wednesday it could not answer questions about either investigation.

Diesel was subjected to new scrutiny after Volkswagen was discovered in September 2015 to have equipped 11 million cars with illegal software that cheated on US emissions tests by turning emissions controls on during lab examinations and off during everyday driving to improve performance. The company has pleaded guilty to criminal charges in the US and agreed to more than US$20 billion in civil and criminal settlements and penalties.